“Who is Genízaro?” is the second chapter of an ongoing project that uses portraiture, landscape photography and documentation of cultural performance to illuminate centuries of Indigenous enslavement in the Southwest Borderlands – a 1492 aftermath legacy of Spanish hegemony and human trafficking deleted from the historical narrative. Who is Genízaro? will observe and share the undying success of the modern-day Genízaro, a unique Native American and Hispanic ethnicity born from the brutality of imperialism. 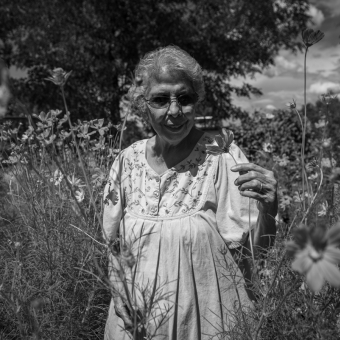 As a Genízaro child, Theresa Jaramillo was sent to Saint Catherine’s Indian School in Santa Fe, but she left because the Native students regarded her, she says, as “not being Indian enough.” Jaramillo has found that participating in community observances—such as the Santo Tomás feast day for which she sews ceremonial clothing—has helped her make sense of her Genízaro identity. For her, these shared traditions are both a remembrance and reflection of her community’s unique history. 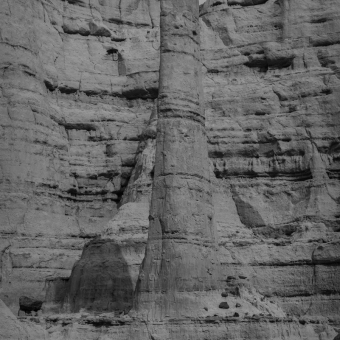 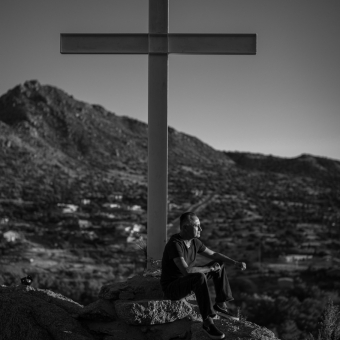 Moises Gonzales is a descendant of a Genízaro family from the Cañon de Carnué Land Grant settlement east of Albuquerque, New Mexico established in 1763. Gonzales visits and prays at Cerrito de Santa Cruz on the land grant and takes in the view of the setting sun over Albuquerque, the city once protected by his land grant community. 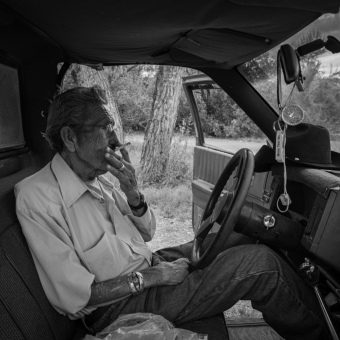 José Roberto Garcia grew up in Abiquiú and he can trace his family’s history to Spanish General José Mará Chávez, who served as a governmental official during the Spanish, Mexican, and American territorial periods. Garcia also acknowledges his Hopi ancestry. 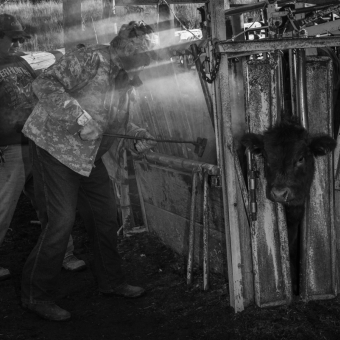 For generations, Genízaro people, such as cousins Johnny and Ben Jaramillo, have supported themselves through farming and ranching. Today, elders are concerned about increasing employment opportunities in Abiquiú so that young people can stay and raise their families in the community. 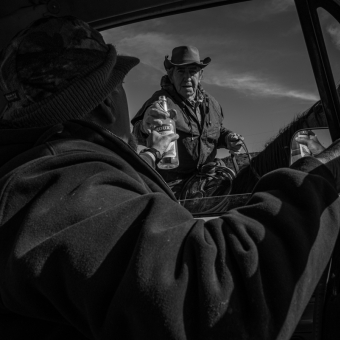 Frankie Lopez and Johnny Jaramillo on top of the mesa. 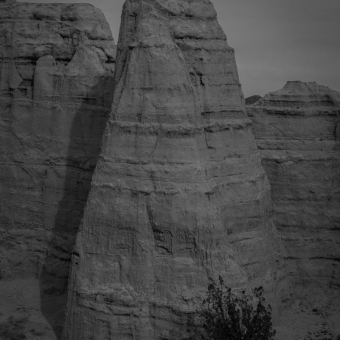 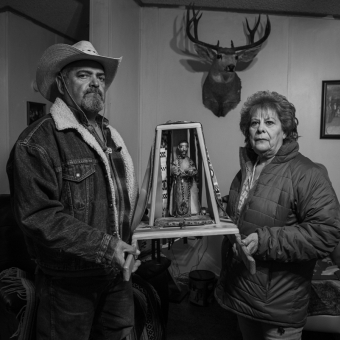 Frankie and Carmen López are Abiquiú’s mayordomos, and, as such, they are responsible for organizing the community’s feast days and social events. About to be carried at the head of a procession, the Santo Tomás bulto, or sculpture, dates to the late 1700s. 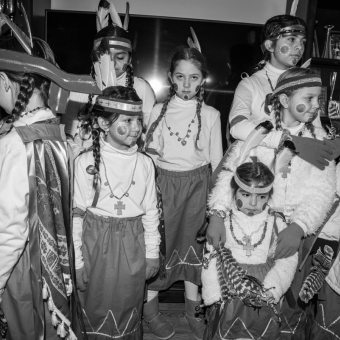 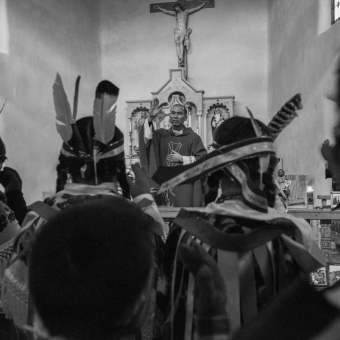 In Abiquiú, the feast day of Santo Tomás is celebrated in November during three days of prayer, song, procession, and dance. The festival not only commemorates the pueblo’s patron saint but also the painful experiences of its people’s ancestors as war captives. Reverend Valentine Phu Au, the Santo Tomás Apostol Catholic Parish priest, holds mass. 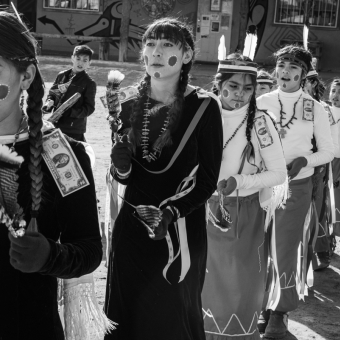 Performed annually for more that 150 years, the Genizaro’s El Captivo Dance memorializes their ancestors’ fall into slavery. Dancers wear face paint, feather hair ornaments, and ankle bells. They also wear dollar bills pinned to their ceremonial clothing, signifying their ancestors’ “ransom” or rather purchase by the Spaniards—and the beginning of their years of enforced servitude. Spanish law allowed them to be free after 10 to 15 years. 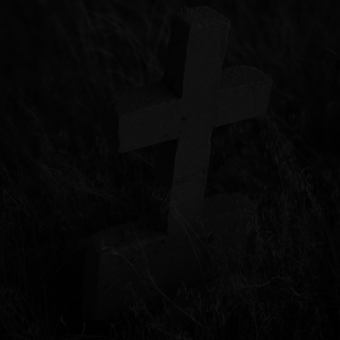 Tombstone in the borderlands 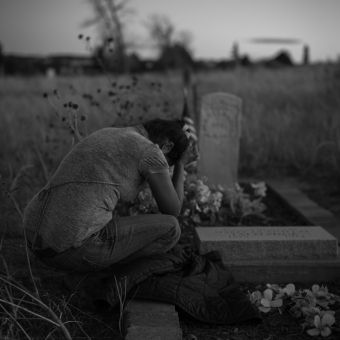 As a child Laura Tolmich heard stories about a Diné ancestor who was taken captive and ransomed into servitude by Spanish settlers along the New Mexico and Colorado border. As an adult Laura has retraced the path of her great-great grandparent throughout the borderlands and has recently discovered her grave site near the small town of Walsenburg, Colorado. 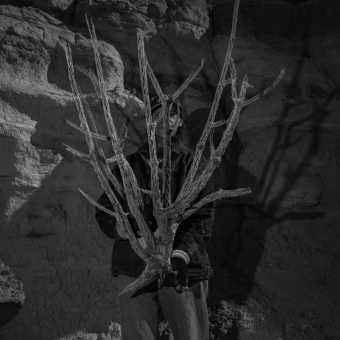 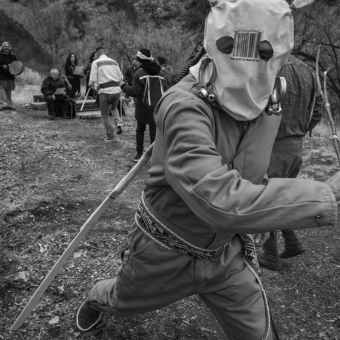 Comanchito Danzante perform during Cañon de Carnue Santo Nino Feast Day. This ritual memorializes the Genízaro’s at Carnue violent past with the Comanche and Hispanic traders. Like the Abiquiú land grant, Cañon de Carnue is a Genízaro land grant established by the Spanish crown in the 1763. This Genízaro settlement was strategically placed along a Sandia Mountain migration corridor leading into the Spanish settlement of Albuquerque. 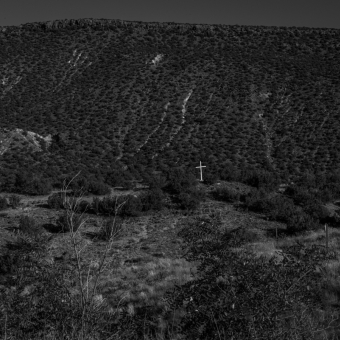 A cross in northern New Mexico’s Rio Chama Valley. The legacy of Native American captivity and slavery in the Southwest borderlands involved the Roman Catholic church. 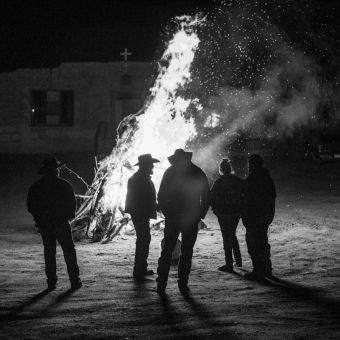 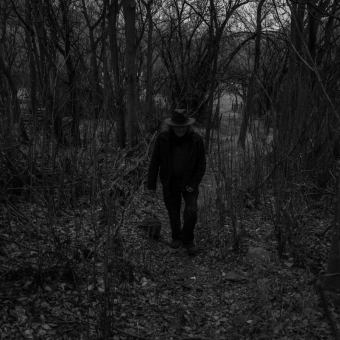 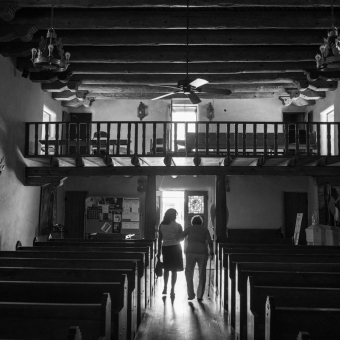 Rafaelita Martinez and Daughter Elizaida departing the Santo Tomás Parish. The Genízaro people of Abiquiú are surrounded by their history. It is not only embedded in their land but in the ancient pottery shards they find in their fields as well as their ranching and farm work, acequias, orchards, faith traditions, and colonial churches. Their sense of place and sense of history are indivisible, as is their Indigenous and Hispanic heritage. 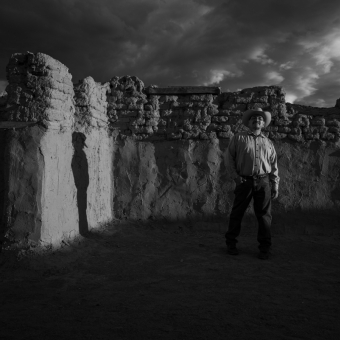 Sections of adobe church walls are all that remain of the 18th-century Spanish colonial settlement of Santa Rosa de Lima. Created as a frontier settlement to protect Spaniards farther to the south, it was repeatedly attacked by northern tribes and eventually abandoned. Like other Abiquiú Genízaros, Delvin Garcia periodically visits the site to acknowledge its significance in the lives of his ancestors. 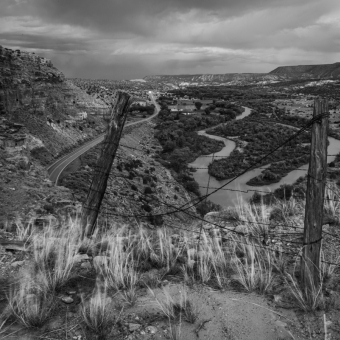 The Genízaros history is born out of slavery and violence. For centuries, the Apache, Navajo, Pueblo, and Ute peoples forged trails in and out of the rugged Rio Chama Valley, while Tewa and other Pueblo peoples farmed along its river. By the 1700s, the Rio Chama valley had become a violent imperial frontier marked by deadly clashes, retaliatory raids, and a brutal trade in Native slaves. The creation of New Spain in 1535, and then the extension of the Spanish Empire into the Southwest in the 1600s, had transformed the region. The conflicts forever altered the lives of Native peoples, including those who would become known as the Genízaro of Abiquiú. 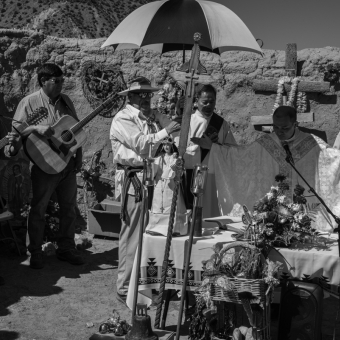 Since Abiquiú was established in 1754, its Genízaro people, freed from Spanish captivity but living precarious lives on the frontier of New Spain, have returned to what remains of the Santa Rosa de Lima settlement and church to honor its patron saint by celebrating mass on her feast day. 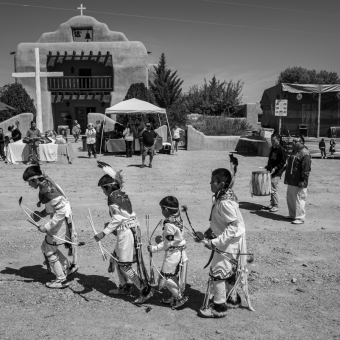 A youth Pueblo dance group from Ohkay Owingeh (San Juan Pueblo) performs the Bow and Arrow Dance on the Abiquiú plaza, to honor both the patron saint and the Pueblo’s historical ties to Abiquiú. 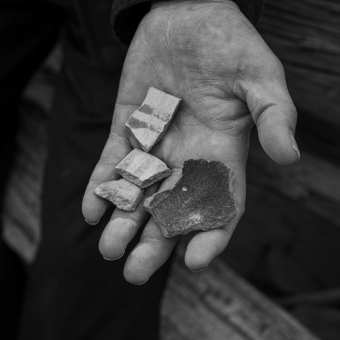 Abiquiú’s Genízaro farmers and ranchers often come across Ancestral Puebloan awls, arrow straighteners, hoes, stone points, and pottery shards in their fields. Some of these tools date back 800 years and are a poignant reminder of the Native peoples who settled in the Rio Chama Valley prior to the Spanish intrusion into the Southwest. 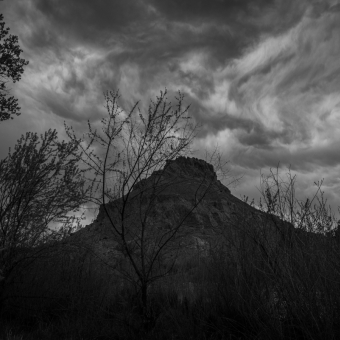 Red Cliffs and monsoon clouds in the Rio Chama Valley. 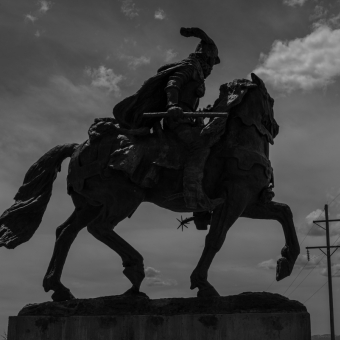 Juan de Oñate was the delusional and brutal Spanish conquistador who established the first European colonies in Pueblo Territory in what is now the southwest United States along the Rio Grande watershed in northern New Mexico in the late 16th century. Found guilty of cruelty, immorality, and false reporting, he was exiled from the colony, fined, and deprived of his titles. This statue was removed in 2020. 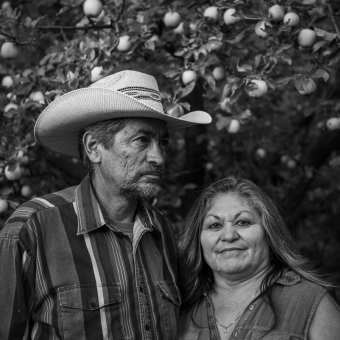 Isabel Trujillo, director of the Pueblo de Abiquiú Library and Cultural Center, says, “Anthropologists and history books have ignored our painful past, but many Abiquiú families have continuously honored our Indigenous ancestry with ceremony, dancing and feast days.” 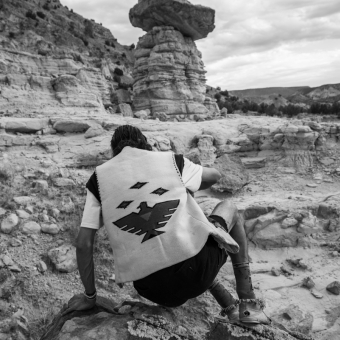 Artist Maurice Archuleta is a descendant of an original Genízaro family in Abiquiú and actively participates in the social life of this community. “Since I was a child,” he says, “I’ve learned our traditional stories, dances and songs.” Archuleta is particularly drawn to ceremonial dance and is a keen observer of other Pueblo dancers’ footwork. He helps perpetuate Genizaro dances by occasionally reinvigorating them with new steps.

Who is Genízaro? will be the second chapter in a projected long-term, four part photo essay which will illuminate the weight of 500 years of Native American slavery in the Southwest Borderlands. Through portraiture, landscape photography, and documentation of cultural performance – with the intent to reclaim our narrative – Who is Genízaro? will observe the identity, agency, and resiliency of the modern-day Genízaro, a unique Native American and Hispanic ethnicity born from brutal Spanish imperialism in 17th century northern New Mexico.

Perpetual Indian wars provided cover for slave raids. By the 1600s, thousands of Spanish war captives, mostly Hopi, Comanche, Pueblo, Apache, Ute, Pawnee, and Navajo – ransomed by the ruling caste – became enslaved domestic laborers, miners, and field workers. Eventually, they and their children (many fathered by Spaniards), were allowed by the Spanish Crown’s Law of the Indies, to gain freedom upon reaching adulthood.

By the 1700s one-third of the population of Nuevo México were landless Genízaro, prompting the Crown to create land grant settlements for this group of people, who were considered to be a deplorable caste. Placed strategically along high-mountain migration passes, these Genízaro communities served as a militarized buffer zone against raiding tribes, to protect the colonial villas and Pueblo communities along the Rio Grande. Land grant settlements offered opportunities for Genízaro families to own land, gain social status, and practice ceremony.

Who is Genízaro? will highlight the violent Spanish hegemony and human trafficking in the Borderlands deleted from the historical Anglo narrative. Over the last decade historians have pointed to government and ecclesiastical records indicating that in the aftermath of 1492 the Indigenous slave trade was responsible for a large percentage of the erasure of Native populations throughout the Americas, estimated at 2.5 - 5 million people enslaved. Who is Genízaro? will acknowledge centuries of colonial disenfranchisement and generational trauma and bring honor and visibility to the Genízaro consciousness and experience in these borderlands today.

My curiosity and research into this topic is informed by my own Native American, Mormon settler, and European heritage. My maternal side is descendant of Ho-Chunk and European ancestors. On my paternal side we are descendent of a female Diné captive named Rose, stolen in a raid by Ute, trafficked north into what became Utah Territory, and sold legally to a polygamist Mormon settler, Aaron Daniels, in the mid-1800s. I feel a deep connection to the Genizaro of New Mexico. 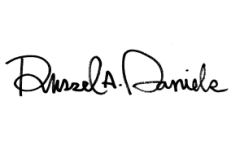 Russel Albert Daniels’ work stands in the currents of art, reportage, and decolonization. Using photographs, he aims to bring visibility to Native American and underserved communities throughout the Interior West and Southwest. His projects explore how identity, sense of place, and history are woven throughout the landscape. His stories about Two Spirit people, missing and murdered Indigenous relatives, defending the Bears Ears National Monument as well as the legacy of colonial era Indigenous captivity and enslavement have helped to inform and prompt conversation about the historical narrative. Daniels lives in Salt Lake City, Utah.