“Syrians in Limbo” is a project about the lives of one million Syrian refugees seeking safety in Lebanon. 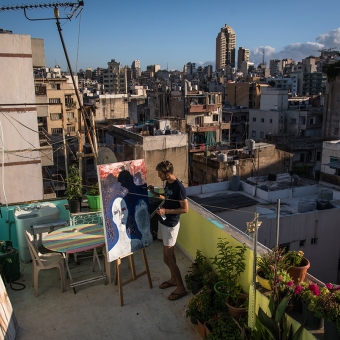 Syrian Shadi Alaiek, 26, on the terrace of the apartment where he lives, in the district of Geitawi. Shadi, born in Salamiyya, and who lived in Damascus, moved to Beirut in 2017 because of the rising cost of living in Syria. In Lebanon he paints - his true passion – but earns his living by translating and teaching. July 13, 2019 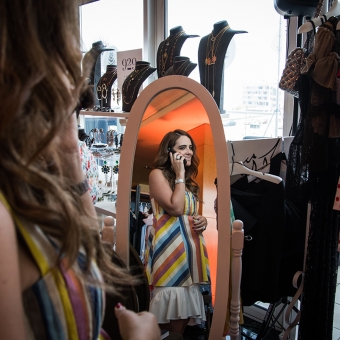 During a fashion show at the Four Seasons Hotel, Syrian designer Noor Azhari speaks on the phone. Born in Aleppo, she grew up between Syria and Saudi Arabia. Noor fled Syria in 2011 to Beirut where she created her own brand, “Caramel.” Today she has three children and is divorced. July 11, 2019 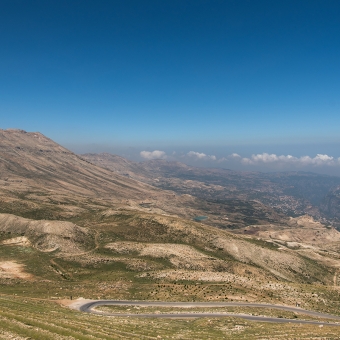 Ariz. The road that connects the Qadisha valley (visible on the right) to the Beqaa valley. The latter area has a Muslim majority and a large population of Syrian refugees, numbering over 120,000. July 20, 2019 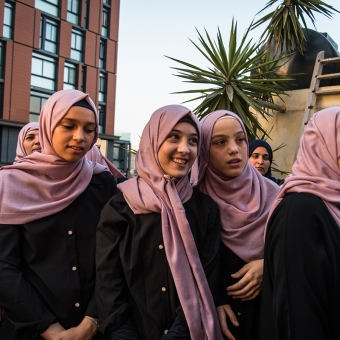 Beirut. Young women gather on the terrace of Zico House, just after a performance of “Beit Bayout,”directed by Farah Wardani, a play inspired by the life of 18 Syrian refugees (here relaxing after the show ends) and sponsored by the Intisar Foundation. July 11, 2019 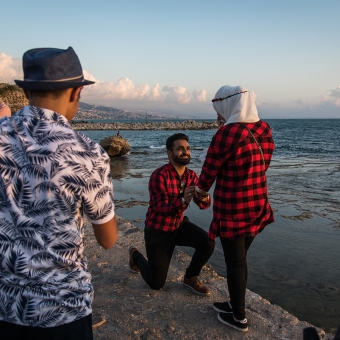 Jbeil. At the port of the ancient city of Byblos, Syrian Ghiath Rumaneh officially asks for the hand of his Syrian girlfriend, Eveen Sukkar, in marriage. Both of them are from Damascus and are in Jbeil on holiday; he is studying in Turkey, she lives in Syria. July 15, 2019 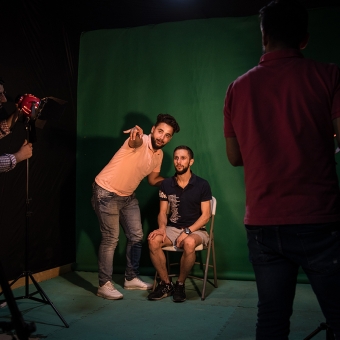 Tripoli. Syrian Nour Al Melli (sitting in the center), 28, is originally from Hama but since 2011 has been in Lebanon, where he studied communications at the university, and graduated in July 2019. Today, together with a few friends, he manages a media platform on Facebook, “Shada,” dedicated to the city of Tripoli, on the northern coast of Lebanon. Here, he is in the office during the recording of a video. July 18, 2019 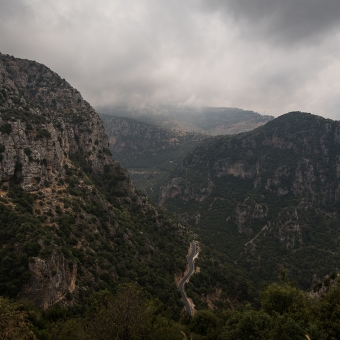 The rugged mountains that separate the coast of Tripoli in the north of Lebanon from the valley of the Beqaa in the District of Minieh, an area with a Muslim majority and a large presence of Syrian refugees, nearly 60,000. July 19, 2019 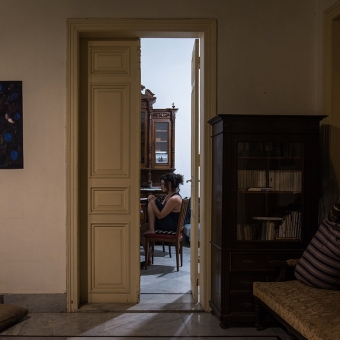 Beirut. Syrian Farah Azrak in her house in the Geitawi district. Born in Damascus, Farah left Syria after the war, traveling to Europe and Canada and then settling in Beirut where, among other things, she deals with body and voice art. July 24, 2019 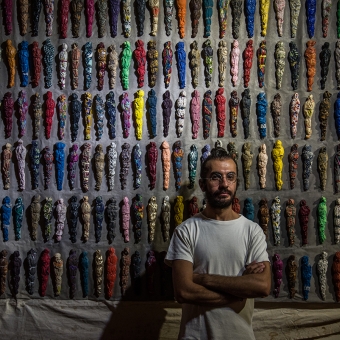 Beirut. Khaldoun Albatal, 33, poses at the Riwaq Beirut bar (opened by three Syrian friends) in front of a painting by Syrian artist Milad Amin depicting the bodies – and souls -- of many dead Syrians. Khaldoun was born in Damascus but fled Syria in 2014. Today, with his NGO, Al Caravan Project, he is helping Syrian children in Lebanon. July 11, 2019 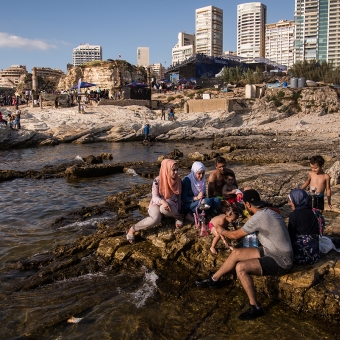 Beirut. Syrians Fatima (center) and her husband Mohamad (right), a professional cook, along with sister Noor (left) and other friends, relax on Sunday mornings near the Raouche Rocks (also known as Pigeon Rocks). The couple are from Damascus but fled to Beirut in 2016 and live off casual jobs. July 14, 2019 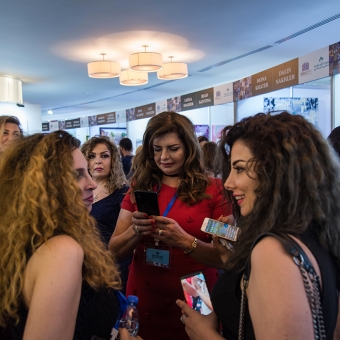 Monroe Hotel, Beirut. At an art fair, the Syrian painter Leena Deeb, from Homs, checks her phone, while surrounded by friends and colleagues. July 12, 2019 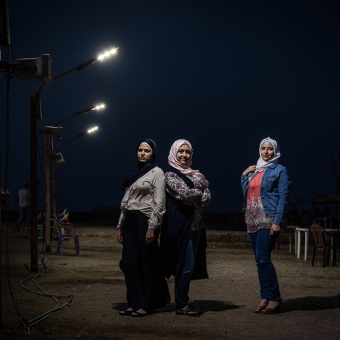 Tripoli. Syrian sisters Dalia and Sally Kalaleeb (center and right), together with their cousin Joudy Al Sibai, at the beach on the island of Bakar, connected to the mainland by a bridge. The Syrians came to Tripoli on holiday for a week. July 17, 2019 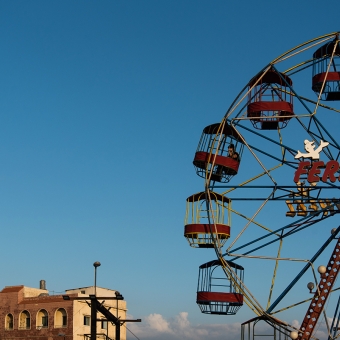 Tripoli. An amusement park along the coast in northern Lebanon. Tripoli, which is about 30 kilometers from the Syrian border, is a mostly Muslim city with a high concentration of Syrian refugees, about 55,000. July 18, 2019 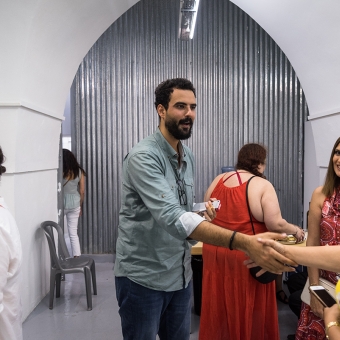 Beirut. At gallery 392RMEIL393,  the Syrian artist Sami Al Kour, 28, welcomes friends to his exhibition’s vernissage. Born in Damascus, Sami has been living in Beirut since 2018, where he is continuing his work as an artist. July 23, 2019 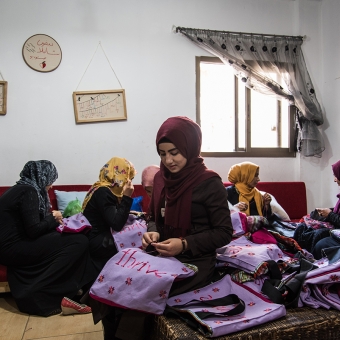 Beirut. At Shatila refugee camp, 18-year-old Syrian Reem Ail embroiders with other Syrian women at Shatila Studio, a social enterprise founded in 2019 that employs over 100 Syrian and Palestinian women living in Shatila. Reem was born in Deir el-Zor, Syria, but in 2014 she fled with her family to Lebanon. She is the oldest of 12 siblings and works because her family needs money. July 25, 2019 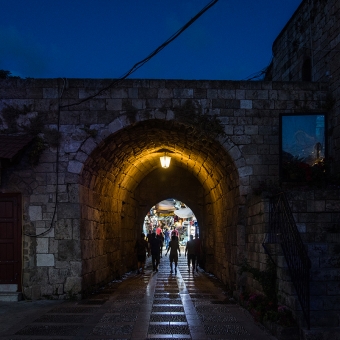 Jbeil. Walking through the ancient city of Byblos. July 15, 2019 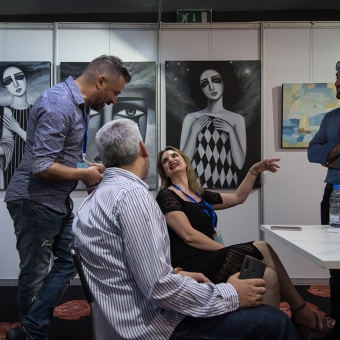 Monroe Hotel, Beirut. At an art fair, Syrian artist Sana Atassi talks to some friends. Sana lives in Damascus where she works as an artist,  but she often comes to Lebanon for work. In her paintings she depicts “the pain of Syrian women, without rights and afflicted by war.”  July 12, 2019 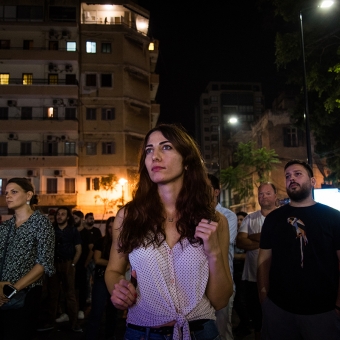 Beirut. Syrian Enas Safadi, 29, attending a concert on Jeanne D'Arc Street, during the Global Week for Syria festival. Enas, originally from the city of As-Suwayda, is a member of the Druze community, and has been living here for three years. “Finding work for us Syrians is not easy,” she explains, “and so far I have been a volunteer for NGOs and take courses in acting.” July 11, 2019 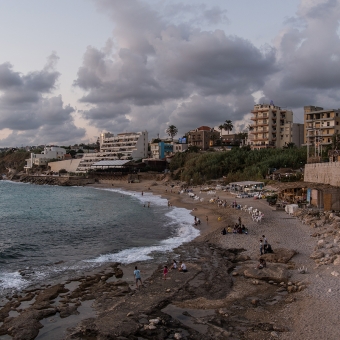 Jbeil. Bahsa Beach, just north of the ancient city of Byblos, is often frequented by both Lebanese locals and Syrian refugees. July 15, 2019 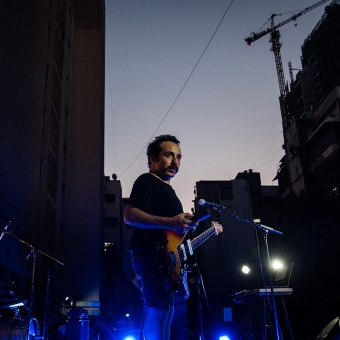 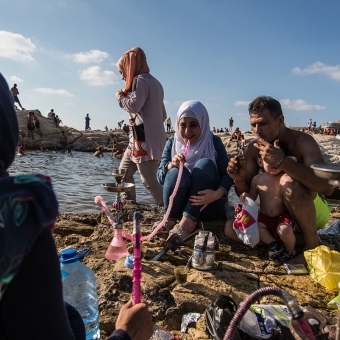 Beirut. Syrians Fatima and her husband Mohamad, a professional cook, together with his sister Noor and other friends, relax on Sunday mornings near the Raouche Rocks (also known as Pigeon Rocks). The couple are from Damascus but fled to Beirut in 2016 and live off casual jobs. JULY 14, 2019 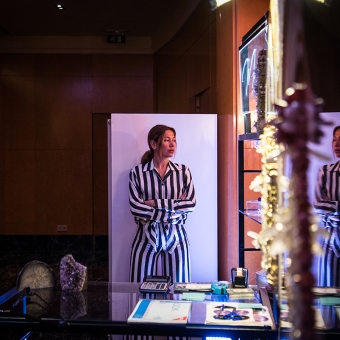 Beirut. During a fashion show at the Four Seasons Hotel, the new Syrian designer Ola Nassour poses next to a mirror. In the fashion field for three months, Ola – who created her own brand, “O Fashion” - was born in Damascus and married her husband Ali in 2009. They live in Beirut with their three children.
July 11, 2019 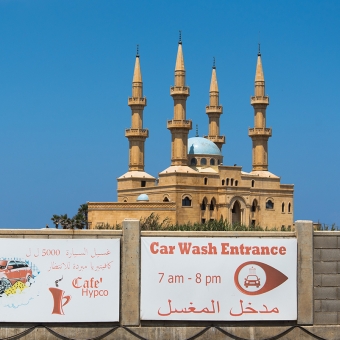 Tripoli. The Al Shukr mosque in Tripoli, which is 30 kilometers from the Syrian border. Tripoli is overwhelmingly Muslim, with about 55,000 in the city. July 19, 2019 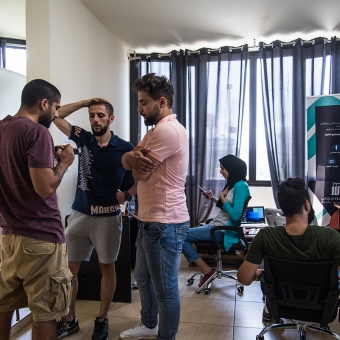 Tripoli. Syrian Nour Al Melli (second from left), 28, is originally from Hama, Syria. He has been in Lebanon since 2011, where he studied communications at university, graduating in July 2019. Today, together with some friends, he manages “Shada,” a media platform on Facebook, dedicated to the city of Tripoli. July 18, 2019 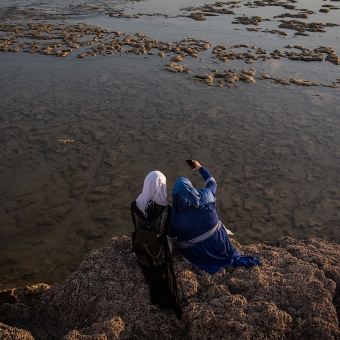 In the ancient city of Byblos, two Syrian girls take photos of each other on a rock in the port area. Both from Damascus, they now live in Lebanon. July 15, 2019 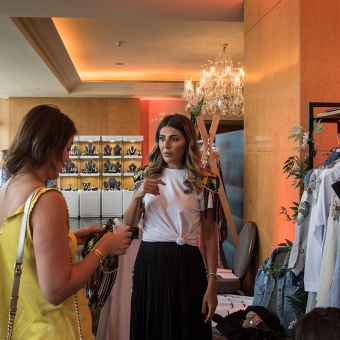 Beirut. During a fashion show at the Four Seasons Hotel, Syrian designer Jwana Almou Kayed, 39. Born in Aleppo, she fled to Beirut with her husband and children in 2012. A few years ago she created her brand, “Precious,” together with a partner, her Lebanese friend Diala. July 11, 2019 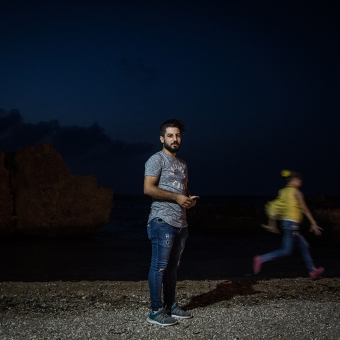 Tripoli. Syrian Asem Nayrab, 27, on the beach on the island of Bakar. Assem is originally from Idlib but since 2011 he has been in Lebanon, where he studied communications at university and volunteered for Save The Children. July 17, 2019 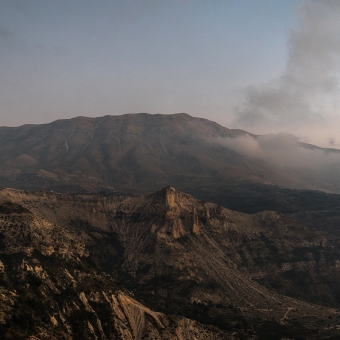 Ariz. The mountains that separate the Qadisha valley from the Beqaa valley. The latter area has a Muslim majority and a large population of Syrian refugees, numbering over 120,000. July 20, 2019 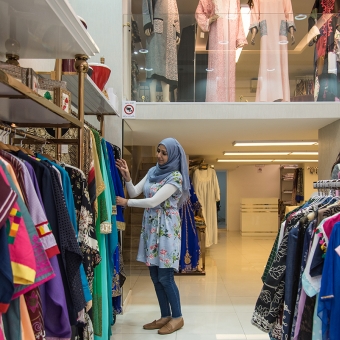 Beirut. Syrian Nour Imad, 32, works in the Jadayel traditional and artisanal clothing shop in the Muslim district of Hamra. Nour was born in Damascus but fled to Beirut in 2012 because of the war. July 13, 2019

They have fled the war in Syria. There are more than a million. But Beirut does not consider them refugees. In the past, as workers, they helped rebuild Lebanon from the rubble of war. Today they seek refuge there from their own war, the bloodiest in recent decades. They are Syrian refugees – one million according to the UNHCR, but in reality many more – who since 2011 have been crossing the border to take refuge in a safe country.

“Lebanon is welcoming and has a generous heart,” Pope Francis has said, referring to an unequivocal fact: Lebanon (a little larger than Cyprus with 4.5 million inhabitants, excluding Syrian refugees and 250,000 Palestinians) receives more refugees per capita than any other country in the world, following a centuries-old tradition that has always seen its rugged mountains as a shelter for persecuted minorities.

But some Lebanese have been less than welcoming, rallying around the slogan, “Lebanese First,” arguing that Lebanese must come first in civic and political life – and often using that sentiment to discriminate against Syrian refugees.

But there is another problem: terms such as “refugee” or “displaced person” make no sense in Lebanon because the country has never signed the 1951 Geneva Convention on Refugees.
The result is a legislative vacuum: there are no official refugee camps and many Syrians have been living for years in a legal limbo that often prevents them from obtaining a residence permit and thus from finding work.

“It’s paradoxical, there are wealthy Syrians who come to Lebanon on holiday and go to the seaside,” says Ahmad, who lives in the city of Tripoli, along the sea in northern Lebanon. “While I, who can’t go back to Syria, live here but have a tough time supporting myself respectably.”

Some Syrian refugees do volunteer work and some study. Others get by as artists, musicians, online teachers of Arabic, or work as waiters, off the books.

And then there’s the other side of the coin, that of the most fortunate. Those who have money. “My work permit? I took care of it in a day,” designer Noor Azhari says with a smile. “I’m from Aleppo but left in 2011. You’ve just got to pay. It’s easy, right?”

In 2020 he won first prize in the Still Life Category at the Sony World Photography Awards, and first prize in the Environment Story Category at the Best of Photojournalism Awards, hosted by the NPPA (National Press Photographers Association). He was also a finalist for the 2020 Aftermath Project grant. In 2016, his work on the post-ebola situation in Sierra Leone won PDN’s Photo Annual in the Documentary/Photojournalism category. His photo reportages for the Italian edition of National Geographic have won Best Edit Award five times, in 2010, 2011, 2017, 2018 and 2020.

Gandolfi teaches reportage at Officine Fotografiche in Milan. He has also curated exhibitions, served on photography juries and he regularly holds photojournalism workshops and portfolio reviews.