A personal journey and memoir into the loss of her brother, a Vietnam veteran who later committed suicide; a journey which is also an exploration of Hines’ own story as a survivor. 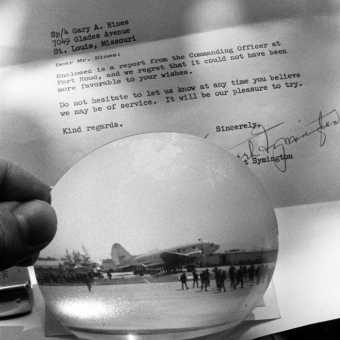 My parents’ and Gary’s desperate attempt to prevent him from being sent to Vietnam were futile in the end. I can only imagine how my parents felt when they opened that envelope and read this letter. Below the text of the letter is a photograph that Gary took of soldiers arriving in Vietnam. 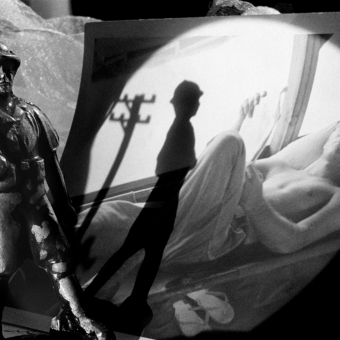 Reading Gary’s letters from Vietnam brought the past back to life and I remembered things I hadn’t thought about in more than half my life. I made the photographs in Chapter 1: The Remembrance, from the perspective of my childhood self and my adult mind. 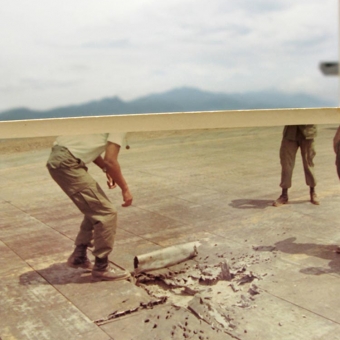 In the early morning hours of February 7, 1968, enemy forces utilizing 120mm rockets attacked Chu Lai airfield. Thirteen rockets landed in the vicinity. Holding up one of Gary’s photographs depicting the damage to the airfield flight line, I stood in the same location where the bombs once fell. The profile of the mountain range told me that I was in the right place. 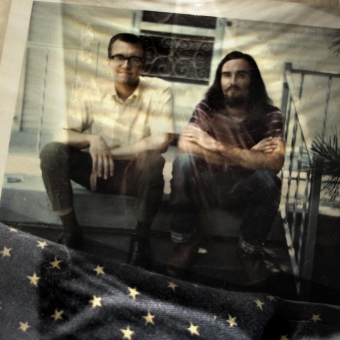 I Pray For Your Spirit. I took the original photograph of my two brothers, Gil on the left and Gary on the right, when I was about 13 years old. The time period was post-Vietnam War and Gary had taken on the appearance of many of his returning comrades—the shockingly long hair for the day and his creative clothing signified the rebellion that was the spirit of the times. Gil and Gary were 14 months apart in age and had very different outlooks on life. Looking back now, it is strange to me that I would use this photograph in my work, none of us aware of what lay ahead. 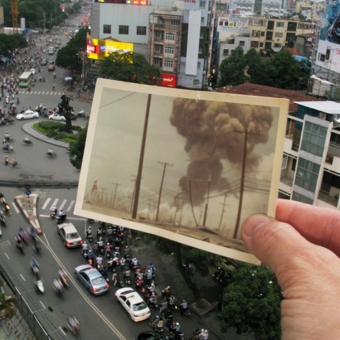 I was standing on my balcony one evening in Saigon watching in amazement, the traffic below. When I decided to make this photograph, it was not planned but felt—the image formed in my mind as I stood there in the fading light. I quickly ran into my room, grabbed the camera and made the shot before the light disappeared. The photograph I held was taken by Gary of what appears to be smoke from a bomb blast. I don’t know the exact location where that photograph was made. This is but one of the mysteries surrounding Gary's photographs and experiences during the war. 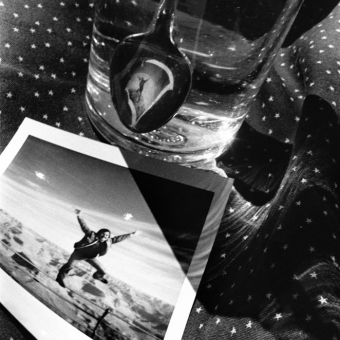 Chapter 1, Untitled #20, The Remembrance. About three months before Gary died, he went on a camping trip to the Grand Canyon. My mother found this snapshot among his belongings. Apparently no longer caring if he lived or died, he stood on one foot and balanced on the edge of the abyss of Grand Canyon. 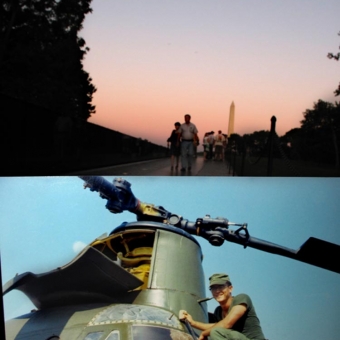 On my way to my first reunion to meet my brother’s comrades from the 178th Boxcars and the 132nd Hercules, I stopped in Washington DC to pay my respects at the Vietnam Veterans Memorial Wall. I discovered that most of the people I met that day did not realize that the names of veterans who died of war-related injuries years later—due to exposure to contaminants or by suicide—are not on the wall. I wrote a letter to Gary and taped it to the wall. His name was there for the day. 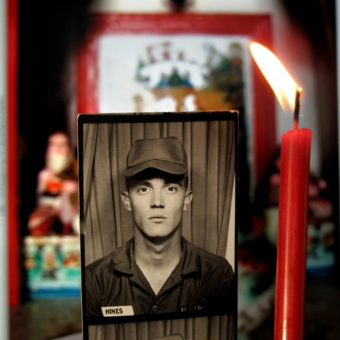 Incorporated into my image are photographs that Gary took of himself before the war in the popular and commonplace photo booths of the time. More recently, I constructed this image using a second photograph that I took at the home of a rice farmer on my second trip to Vietnam. Wearing his new uniform and sporting the required “army issue” haircut, I think Gary was trying to come to terms with his new identity as a soldier. With this image I pay respects and honor the memory of my brother.
View the photo gallery
Photographer's Statement:

In 1967 my brother, Gary, a soldier in the U.S. Army, was sent to the American war in Viet Nam. Because our parents were ill and Gary was our caretaker, he made a request to Senator Stuart Symington seeking his help to avoid the order. A letter arrived on October 9, 1967, informing him “We regret that it could not have been more favorable to your wishes.” He was instructed by the Commanding Officer to report to the United States Army Overseas Replacement Station in Fort Lewis, Washington on October 31st for further assignment overseas. On November 4th, my brother arrived in Qui Nhon, Viet Nam. It was my eighth birthday. Because my parents could no longer care for me, I was sent to live with numerous relatives. When my brother and I said our good-byes it would be the last time we saw one another for years.

Gary wrote many letters home while he was stationed in Viet Nam. Pictures arrived. Although in his letters he spoke of his living quarters and told us about the helicopters he flew into the front lines, he rarely discussed the dangers that he faced, so as not to cause us more worry.

Honorably discharged from the army in 1969 with a “service connected nervous condition,” we later came to know his problem as “Post Traumatic Stress Disorder.” My pre-war brother, a normal and well-adjusted person had become, according to the Veterans Administration, 50% disabled. He took his own life ten years later.

More recently, while perusing Gary’s Vietnamese/English dictionary, I found hand-written declarations of love from a Vietnamese woman. The two had fallen in love and I have since confirmed their plans to marry. Gary returned to Viet Nam in early 1970 to live and work at Lear Siegler as a civilian. He never told any of us of his love. Gary’s reasons for leaving Viet Nam that second time and returning home again remain a mystery.

A memo pad I found among my brother’s belongings reveals the names and addresses of his wartime friends. Thirty-five years after the war, I have contacted some of them. Many of his friends are now deceased—having died young. In an attempt to better understand what happened to my brother, I made these photographs and journeyed twice to Viet Nam where I retraced Gary’s “footsteps” using his letters and photographs to serve as guides.

When I began this series, my first impulse was to photograph Gary’s letters and belongings, made in-camera, from the point of view of my childhood memory. They became Chapter 1, The Remembrance. After beginning this work, I became somewhat preoccupied with unraveling the mystery behind Gary’s life and death and to better understand the brother I never really knew. Our father, Lee Grainger Hines, made the drawings of battle when he was a child during World War I.

I continue to make discoveries about wartime in Viet Nam as experienced by its veterans. The visual record of those experiences continues to unfold. In titling this series, My Brother’s War, I make reference to the other families worldwide who have lost and are presently losing loved ones in war.

Artist and storyteller Jessica Hines, uses the camera’s inherent quality as a recording device to explore illusion and to suggest truths that underlie the visible world. At the core of Hines’ work lies an inquisitive nature inspired by personal memory, experience and the unconscious mind. Hines began to cultivate her creative disposition early in life and her love of the arts led her to attend Washington University in St. Louis, where she earned a Bachelor of Fine Arts degree. Continuing to pursue her interests, she studied photography at the University of Illinois at Urbana-Champaign where she received a Master of Fine Arts degree.

Hines’ lectures and exhibitions have taken her work worldwide and most recently she received The Kolga Award for Best Experimental Photography, a Humanitarian Documentary Grant in the WPGA Annual 2010 Pollux Awards, First Prize in Fine Art Portfolio in the World Wide Photography Gala Awards 2010, Grand Prize for portfolio in the Lens Culture International Exposure Awards 2010 and exhibited in the New York Photo Festival 2011 PhotoVisuara’s In Love and War.