For God, Race and Country

For God, Race and Country

A work-in-progress about “America’s first terrorist organization, the Ku Klux Klan,” and Capozziello’s exploration of why KKK members continue to believe in white supremacy. The judges were impressed by the access Capozziello has gained to his subjects, as well as the strength of his photos. 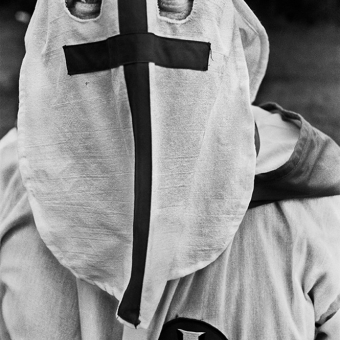 This is my first time at Leonard's home. We stand outside in the dirt driveway, talking with another member. I ask them questions about why they have joined the Klan, and what it is that they do. I get the sense that I am boring Leonard as he runs into his trailer, laughing about how I’ve never seen anything like this before, being from the North and all. Minutes later he emerges, chuckling beneath his hood, and tells me to make a picture. 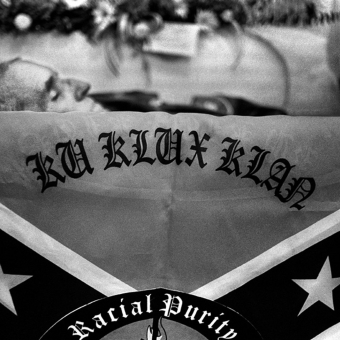 I received the email yesterday, telling me that their Imperial Wizard died and that I could meet them at the wake. In the early evening, I nervously drive an hour to Petal, Mississippi; and, with the sun setting behind me, I make my first photograph of a Klansman. 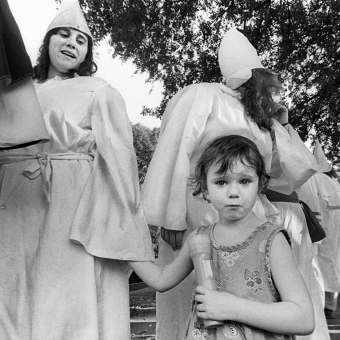 And she looks at me as if she is about to cry, and her mother looks at her with a smile, and in my heart I weep and at the same time wonder why she holds that flashlight in broad daylight. I ask her what her name is, and she sheepishly tells me, "Holly." 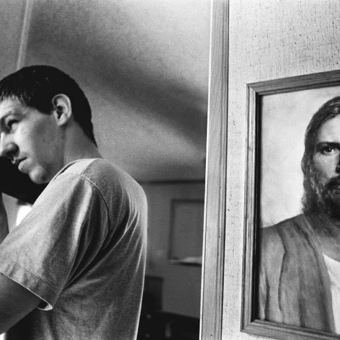 David looks out the window down the barrel of the shotgun, and talks jokingly how he’d like to go shoot up some blacks, reassuring me that he is only kidding; I believe him. And listening and photographing, and hoping this will say something, I cannot stop myself from looking at those open eyes that seem to look where David is looking. 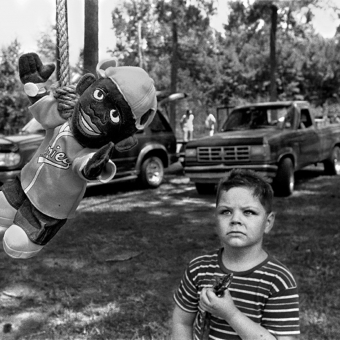 They laugh because to them it is a joke, but I look at his eyes and his hands clenching the stick. He beats the doll, looking to his parents for approval and finds faces that are smiling at what he has done. 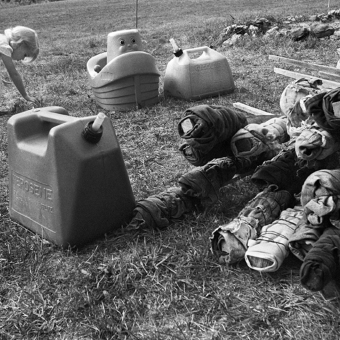 Tonight men will walk in this field under the moonlight, and they will pick up these kerosene-drenched torches, and they will circle the cross, step forward, and light it. Everyone will stop and stare, as if something tremendous, something spiritual, is happening. The sound of crickets will be in our ears, and a sweat that comes from nervousness will pour down my face, burning my eyes as I try to see through the camera. 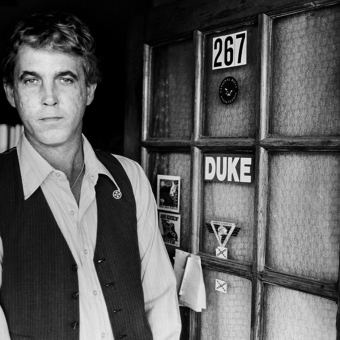 Richard's Imperial Wizard has just died, and it is assumed that he will be the one to take the place of Mr. Maxey and lead their Klavern. 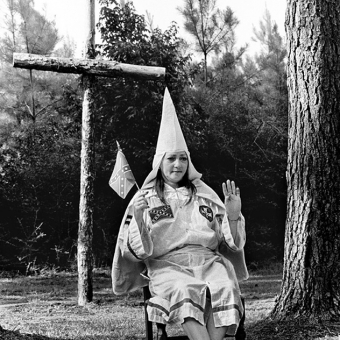 Lisa, the Imperial Wizard's wife, sitting for pictures before a cross lighting. 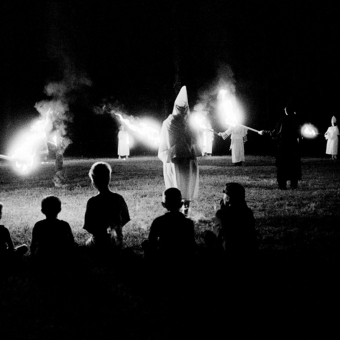 As the fire breaks the darkness, the light it brings represents the light that Jesus brought to this dark world for the Klan. They see it is a warning of the coming disaster that faces the United States if it continues on its Godless course. As the Klansmen and Klanswomen take part in the ceremony, a child rises and exclaims with great joy, “Look, there’s mommy!” 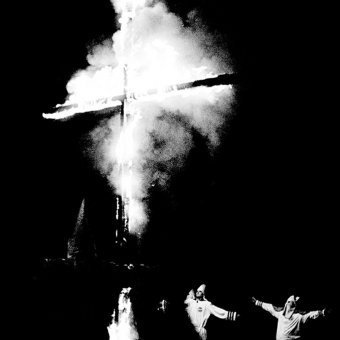 A dozen hooded figures slowly walk around the large wooden cross that is planted at the bottom of the hill. They look like a Christian does in a worship service with their arms raised and their eyes fixed on the cross; and these Klansmen say they are Christian. Flames fill the sky as the men in robes exclaim as one, “For God, Race, and Country. White Power!”
View the photo gallery
Photographer's Statement:

On April 11, 1865, two days after Robert E. Lee surrenders to Ulysses S. Grant at Appomattox, the Civil War, America’s bloodiest, is officially over. President Lincoln calls for a Reconstruction of the country – a rebuilding of trust and a dedication to peace. However, what follows was a period that would be marked by racial massacres, vigilante violence, and a violent retention of free labor by many slave owners. The South had lost, but it was the newly freed slaves who suffered the most during this period.

The social order had been turned on its head; no longer were there slaves. The response – America’s first terrorist organization, the Ku Klux Klan is formed. Approximately one hundred and forty-three years after it’s founding, the Klan continues to pass the torch to its next generation. They seem like remains of a forgotten past- still donning hoods and lighting crosses in the year 2011- but the Klan perseveres and their ideals live on all these years later.

When I make pictures, I ask the permission of others to be allowed into their lives – to observe, and to ask questions – in order to learn and understand something that is outside of my own experience. Sometimes, however, photographs are made that offer little understanding. Sometimes we walk away with questions that offer no answers. The more time I spend with Klansmen, Klanswomen, and their families, the more I find myself with the unanswered questions of why these specific people continue on in a course of segregation and hatred. And sometimes, in rare moments, someone in front of my lens begins to open up in ways that can give us a glimpse into answering these “Why” questions.

When I first began photographing members of the Klan, the question I came to them with was, “What is the reason you believe in racial superiority?” The problem with asking that question, is that people often do not truly understand why they do the things they do; often they cannot deal with the reality of why they believe what they believe.

It is always because of something else. Something deeper.

Something behind it all.

One summer night, in 2002, after hours of interviewing, I turned off my tape recorder and stopped asking questions of David, a young member of the Klan. He lay on the hood of his car outside a trailer, and, looking up at the night sky, he explained to me that two black men murdered his mother in 1992, when he was only twelve years old. His voice was hard when he told me this, but not angry. She was a taxicab company owner, and they robbed her, getting away with only $17. I had just spent hours with him, asking him questions about why he was involved, how he had become a Klansman, what he believed, and I had come no where near this. It seemed David had a reason to turn to something so dark, yet it was a reason he could not even vocalize.

Earlier that same night, while explaining to me how the Klan justifies what they believe, David quoted John 3:16
“For God so loved the world, that he gave his only Son, that whoever believes in him should not perish but have eternal life.”
I told him about a close friend of mine, who was Catholic, and an African-American man. I wanted to know if he would not be permitted eternal life based on that scripture, because he was black. David paused a moment and said he had never thought about it that way before. He said, based on the scripture, he thought my friend would have eternal life.

A couple of months later, I received an email from David, and he said that, based on my questions and our conversations, he began to feel that the Klan had it wrong, and that he had decided to leave. All of this, because I was just doing what a journalist does: ask questions.

I will continue to explore why members of the KKK continue to believe what they believe and why they believe it by looking at three families of the South Mississippi White Knights who I am already in contact with. I will utilize funds from the Aftermath Grant as a resource for traveling back to Mississippi from Connecticut during the late spring, summer, and fall of 2012. A portion of my exploration will be to revisit David, the young man who left the Klan, in order to chronicle his life now. Out of the post Civil War South, this fraternal organization was formed, and continues to grow today.