Pep Bonet’s project about young people rebuilding their lives in post-conflict Sierra Leone focuses on those most affected by the war — amputees, the blind and the traumatized. 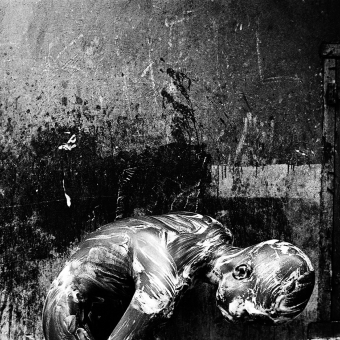 A patient washing himself at the City of Rest (CORE) drug rehabilitation center. The Deliverance Ministry runs the center, which offers counselling and support for recovering drug addicts, alcoholics and traumatized or delinquent youths. The ministry tries to address problems of addiction, delinquency and even cases of demonic possession with rest, food and prayer. 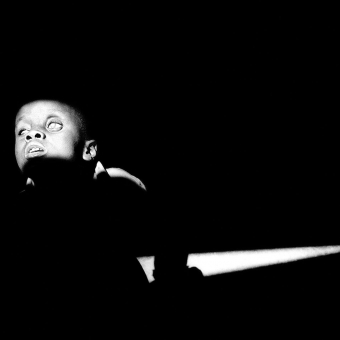 Milton Margai is the only school for the blind in Sierra Leone. Approximately 85 children, 4-to-18 years old, study and live here. In 1998, when RUF-rebels attacked Freetown, the school had to be evacuated. In 1999 it was bombed. Some of the children lost their sight because they were brutalized by the rebels. Early dawn. Kinny Mattia tries to feel the morning light. June 2002. 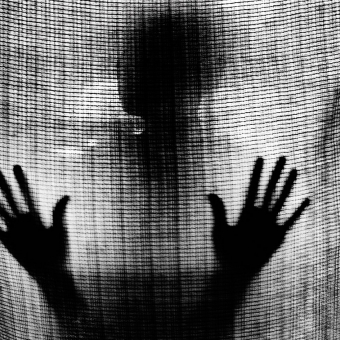 Kinny studies and lives most of the year at the Milton Margai School. Children learn Braille, English, and typewriting in preparation for their adult life outside the school. August 2006. 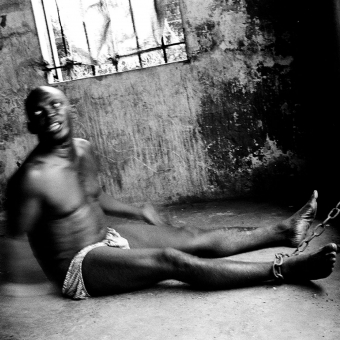 Kissy Mental Hospital. Many of the patients are soldiers or ex-rebels, mainly admitted for psychoses due to severe drug abuse. Others are affected psychologically by Sierra Leone’s civil war (1991-2001). The building is old (built in 1827) and battered by war and lack of maintenance. Patients are often chained to their beds (if they have one) or to the floor, where they sit in their own excrement. Therapies are obsolete. A patient screams. He died four days later, he refused to eat or drink…November 2003. 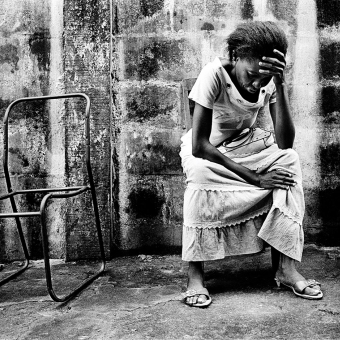 A woman sits next to an empty chair at the City of Rest (CORE) drug rehabilitation center. 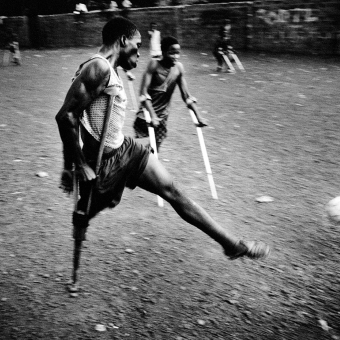 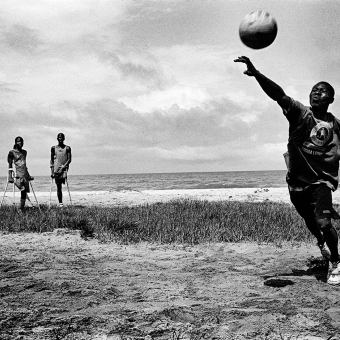 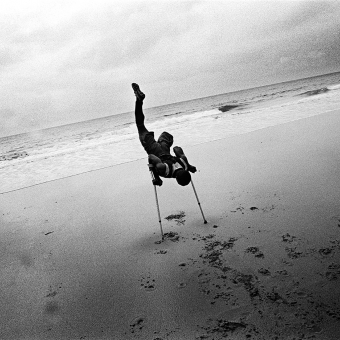 Kalone, a football player from Murray’s Dream Team, stretching while training on the beach.
View the photo gallery
Photographer's Statement:

“If they could have gotten their hands on God, they would have killed Him, too,” Sierra Leoneans say about the rebels. The civil war in Sierra Leone, 1991 – 2002, is labeled the cruelest in Africa’s recent history. Tens of thousands of civilians died, and hundreds of thousands more were raped, burned, tortured, enslaved, and mutilated. The Sierra Leonean amputees, their limbs cut off by rebels, became this war’s heart-wrenching icons.

For five years, I have been documenting the lives of youth in Sierra Leone as they create chances for themselves in a land where opportunities are rare. Before the war, Sierra Leone was the poorest country in the world (according to UNDP figures). It still is, and now it’s in shambles, too.

I first visited Sierra Leone one year after the peace agreement was signed to produce a photo essay on “Faith” for the World Press Photo Master Class. I connected with the kids who were the most affected by the war but who had emerged as the strongest: young people, amputated and blinded, bouncing back to demand the chances that were stolen from them. Former child soldiers and members of rebel gangs were transforming themselves into police and security forces. Even kids who lost their minds in the war and living in a mental home, succeeding in returning to the world of the sane.

I returned three times, each for months on end, to document the struggle of these youngsters. It’s a story that sheds light on a side of Sierra Leone (and of Africa) that we don’t often get to see — of stamina, pride, and self-confidence... Victims of war and poverty? Yes. But their determination humbles us all.

Bonet was born in la Colònia de Sant Jordi, Majorca. In 2002 Bonet was selected to the World Press Photo Master Class with his work titled Faith from Sierra Leone. That same year he was nominated one of the top 30 young talents of the year by the New York photography journal PDN. He was also selected by Photoespaña for his work on Procession of San Lazaro in Cuba. In 2003 he won the Kodak Young Photographer of the Year in Visa pour l'Image in Perpiñan. He also won first prize for FotoPres, first prize in the Fujifilm Europress, and first prize for the Zilveren Camera Holland. In 2004 the Luchetta Foundation in Trieste nominated Bonet the best press photographer of the year and he was also a finalist for the W.Eugene Smith Award for Humanitarian Photography, an award he was to win the following year in 2005. In 2007 Bonet won the second prize in the World Press Photo in Sports for his work on the amputees football league in Sierra Leone.

Bonet is a founding member of the photo agency Noor.

Pep Bonet and Sara Terry are the two artists who have contributed their photographs to this section. Their images illuminate both the toll that the eleven-year civil war took on the civilian population and the human capacity for resiliency and courage. 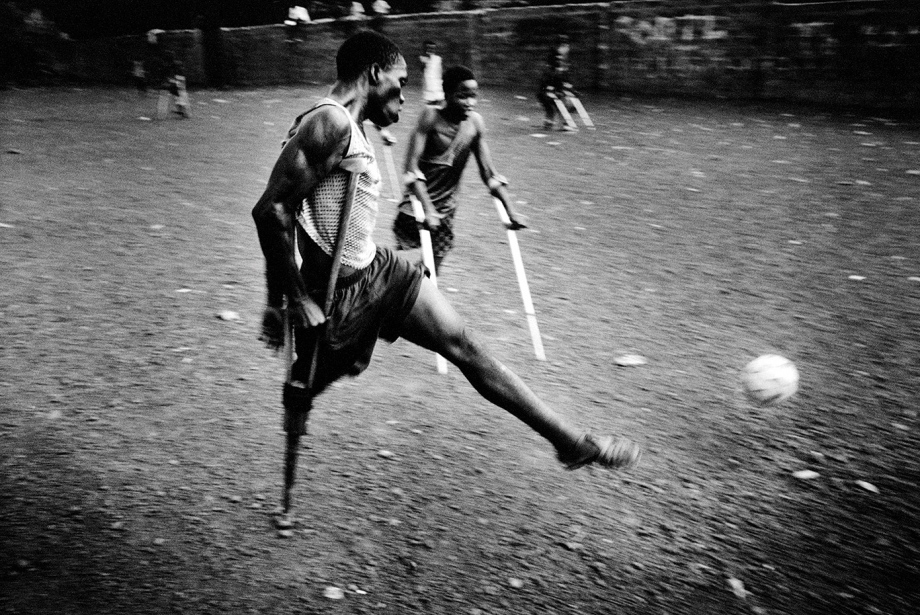 • What is the subject of this photograph? What does the photographer want you to notice? 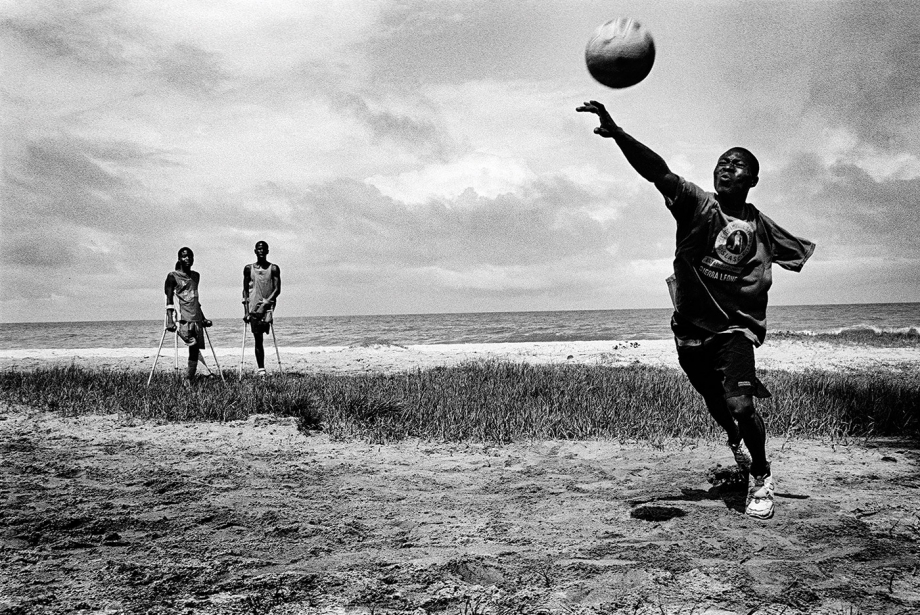 What does the central figure’s body language communicate? The players on the team are all victims of forced amputations. Do they look like victims? 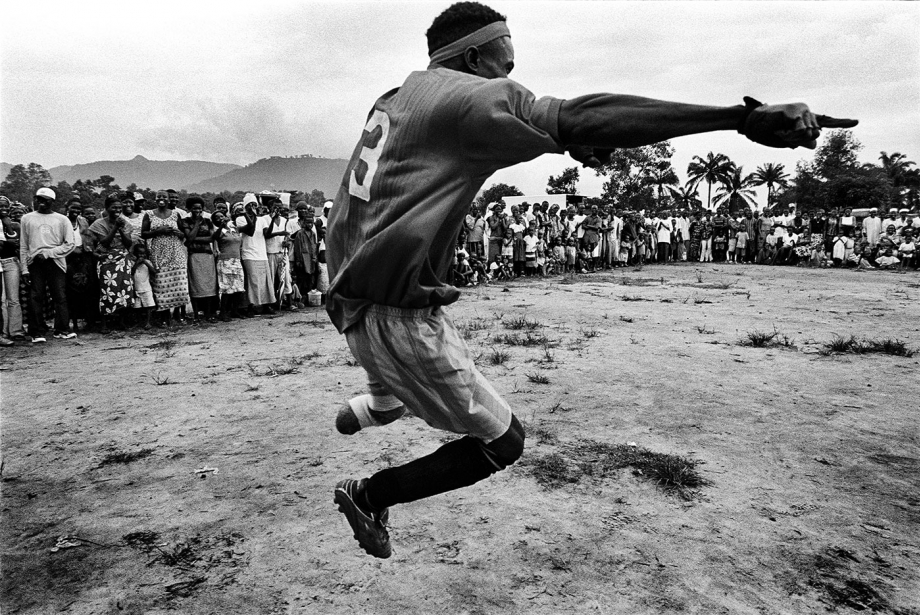 A football player from Murray's Dream Team is seen here celebrating a goal scored during a match being held to mark the team's commemoration day.

• Where are your eyes drawn in this photograph? As you examine the picture, what stands out?

The title of Pep Bonet’s project is “Faith in Chaos,” and he notes in his artist statement that these images capture “the lives of youth in Sierra Leone as they create chances for themselves in a land where opportunities are rare.”

• In viewing these three photographs together, what words or feelings come to mind to describe these young men, given Bonet’s title and description of the project?

• How does the composition of each image speak to the idea of “faith in chaos”?

• Pep Bonet suggests that “these images shed light on a side of Sierra Leone (and Africa) that we don’t often see—of stamina, pride, and self-confidence.” In your view, what are the ways in which these images explore or convey those characteristics?

• How does the common theme of football (soccer) in these photographs help to explain something about life in the aftermath of civil war,
violence, or genocide? 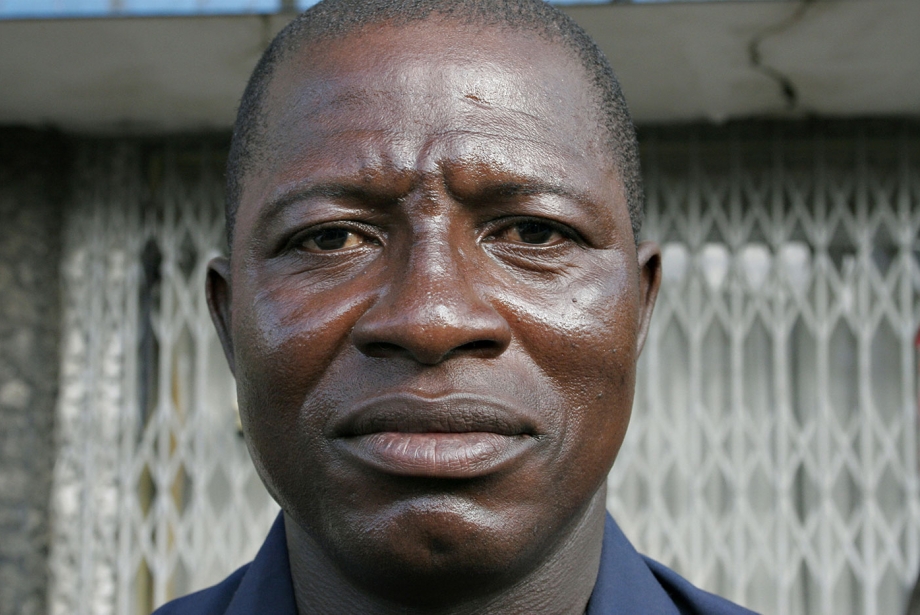 Tamba Ngaujah was the first amputee of the war in Sierra Leone, which featured brutal amputations of civilians by all three fighting forces. Rebels from the Revolutionary United Front (RUF) captured Ngaujah on November 21, 1992, and cut off both of his hands. He has chosen to forgive the perpetrators because he believes that taking revenge would lead to generational conflict.

• Consider the significance of being recognized as the first amputee of the brutal, decade-long civil war in Sierra Leone. How does knowing this fact about Tamba Ngaujah impact your viewing of his portrait?

• In the caption for this portrait, photographer Sara Terry notes that Tamba Ngaujah “has chosen to forgive his perpetrators because he believes that taking revenge would lead to generational conflict.” What do you think of his comment—does it fit with your understanding of justice? In what ways might forgiveness help prevent generational conflict? Some would argue that forgiveness without punishment lets the perpetrators off too easily. Do you agree?

• Do you believe that there are specific elements of a community or characteristics of an individual that impart the capacity to forgive or the inability to forgive? What might these be? 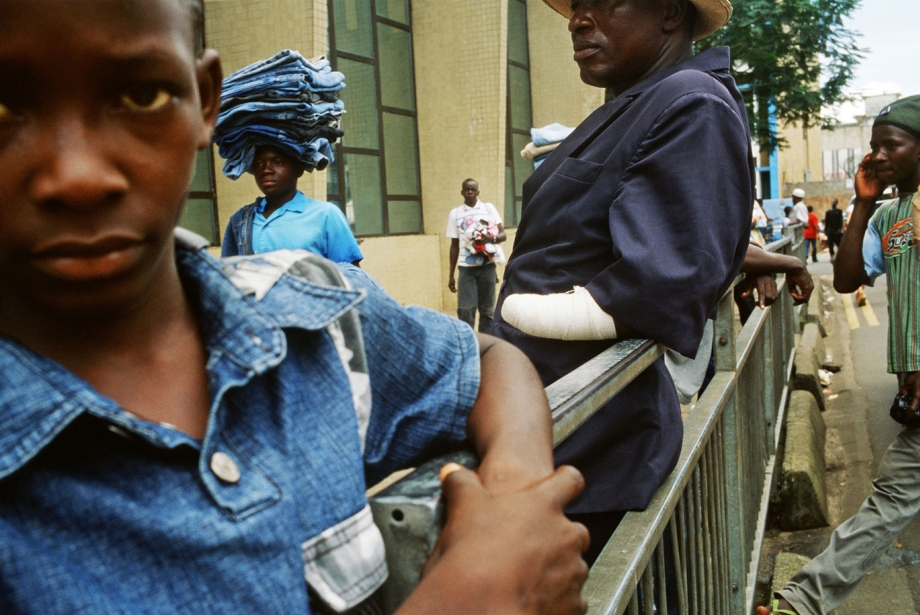 Six days a week, eight hours a day, Ngaujah goes to “work”—standing on the streets of downtown Freetown. He does not beg. He waits, hoping that those who recognize him will slip a few thousand Leones (50 cents) into his pocket. Sierra Leone is one of the poorest countries in the world.

• What do you think that Tamba Ngaujah is doing in this image?

• How does this photograph challenge your idea of “going to work”?

• In the caption, Sara Terry notes, “He does not beg. He waits, hoping that those who recognize him will slip a few thousand Leones (50 cents) into his pocket.” What does the image tell us about Tamba Ngaujah? What do we learn about him by reading the caption? 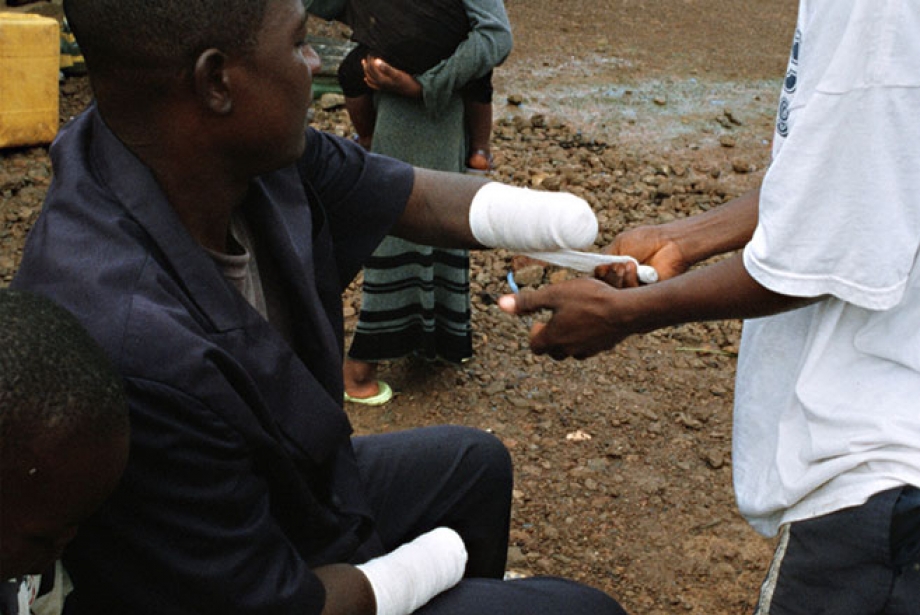 One of Ngaujah’s sons wraps his father’s arms with the white bandages that he wears when he goes out in public. His wife makes sure that his navy blue suit is always clean and carefully pressed.

• How would you describe what is happening? How might Tamba describe the same scene?

• The caption for this photograph offers information we would not otherwise know from viewing the image. How do these new details impact the way you look at the photograph? 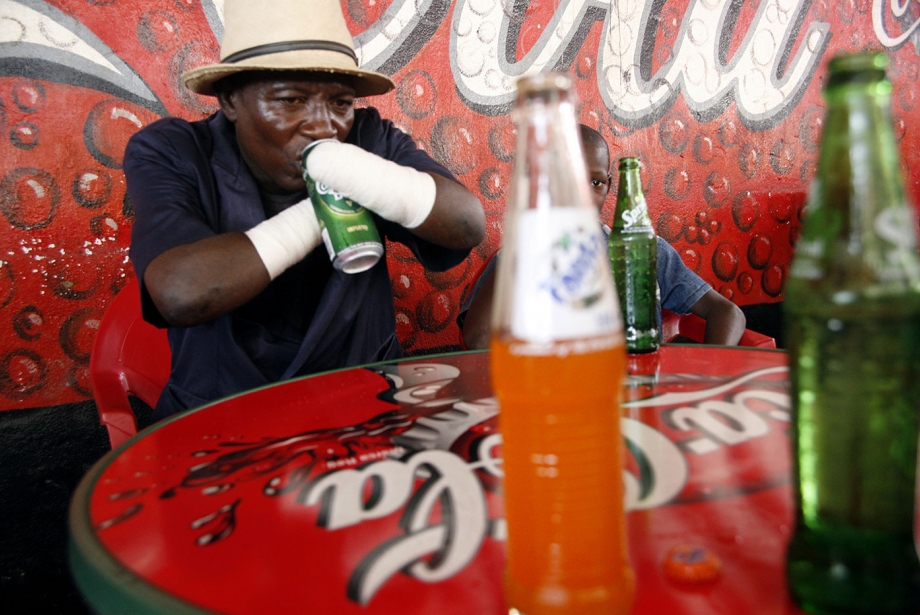 Ngaujah takes a break at a local restaurant, where he often rests during the day to escape from the heat on the streets. Usually he does not eat or drink during the day, saving the money he receives for his family. The only reason he is having a drink on this day is because a visitor bought it for him.

• What elements of this photograph stand out to you?

• Do you think the photographer chose the background deliberately? What does it mean to take a picture of Tamba in front of advertisements for Coca Cola, a product marketed with such slogans as “It’s the real thing” and “Things go better with Coke”?

• What does this image suggest about the aftermath of violence in Tamba Ngaujah’s life?

• What might the photographer be suggesting about the aftermath of violence in Sierra Leone? 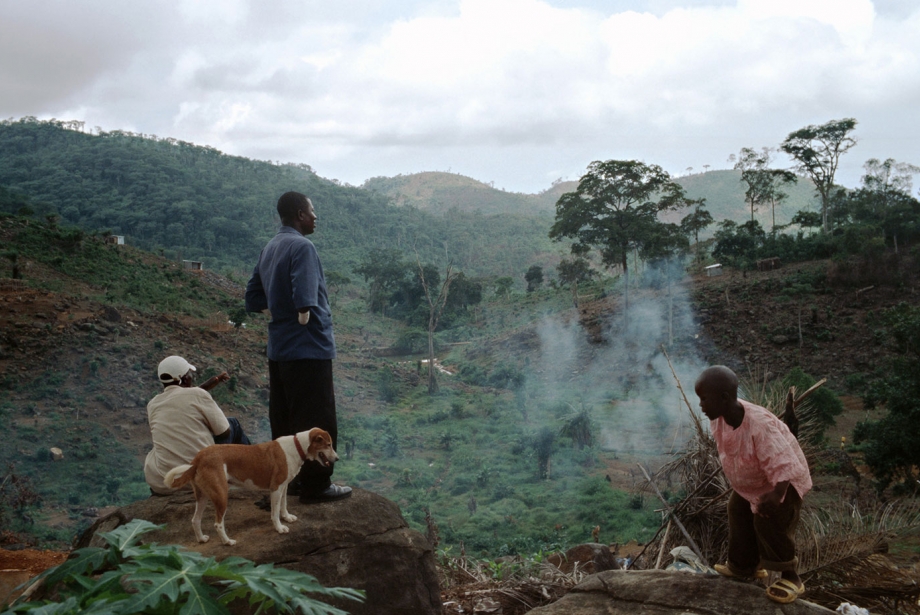 Ngaujah stands on the hillside above Freetown, where he has been able to build a house of zinc metal on a small piece of land given to him by the government. He does not plan to return to Kono, the district where he was born and grew up (and where he was captured by rebels), because he believes that there are better opportunities for him and his family in Freetown, the nation’s capital.

“What has been done, has been done,” he says. “Nothing will bring back my hands . . . When I was amputated, during the three days after that [when] I was wandering in the bush, I was asking God to take my life. But God has a plan. At this time in my life, I think God has a plan.”

• “What has been done, has been done,” Tamba Ngaujah says. “Nothing will bring back my hands . . . When I was amputated, during the three days after that [when] I was wandering in the bush, I was asking God to take my life. But God has a plan. At this time in my life, I think God has a plan.” What does he mean? What is he suggesting about the aftermath of war? What is he suggesting about how he carries on?

In the Land of Magic Soldiers
by Daniel Bergner
http://us.macmillan.com/inthelandofmagicsoldiers/DanielBergner