“Ephemera” is a project which follows life along the Pedieos River, the dividing line between Greek and Turkish Cyprus, and considers the impact of the 1974 conflict. 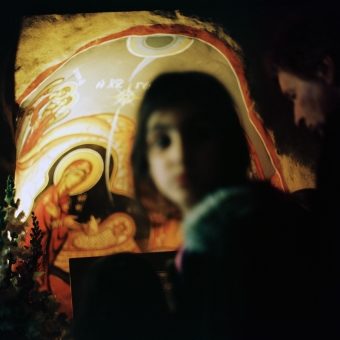 Deftera, Cyprus, March 2019. A young girl stands in front of an icon to pray inside the Panagia Chrysospiliotissa Church, one of the holiest places on the Island. This church was built directly in the rocks, just below the Pedieos River. 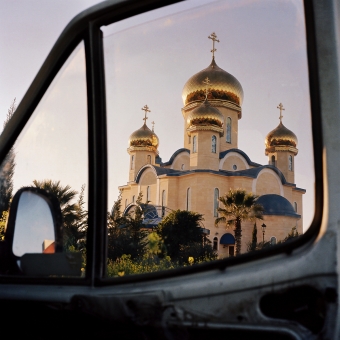 Episkopeio, Cyprus, March 2019. The Russian Church of St. Nicholas, one of the biggest and most impressive Orthodox churches on the island stands a few meters from the Pedieos. 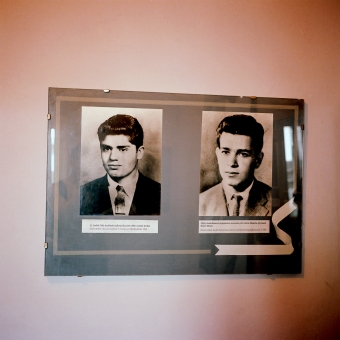 Lefkosa, TRNC, March 2019. Inside the Museum of Atrocities, where portraits of family members killed during an outbreak of intercommunal violence in 1963-64 are on display. The accompanying text says that Greek Cypriots used the river to reach this house and kill the family who was hiding in the bathtub. 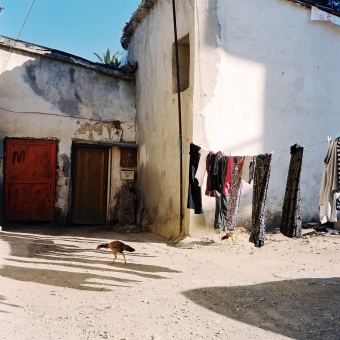 Lefkosa, TRNC, October 2018. Clothes are drying on a line as a rooster makes his way under it inside the courtyard of a home in the old city. Houses that used to belong to Greek Cypriots were given away to Turkish Cypriots after the war on a "point-based" system. After Turkish Cypriots moved into the suburbs, Turks, Kurds and Arabs from southern Turkey started moving in as temporary workers or residents. 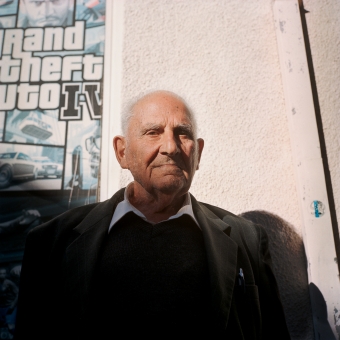 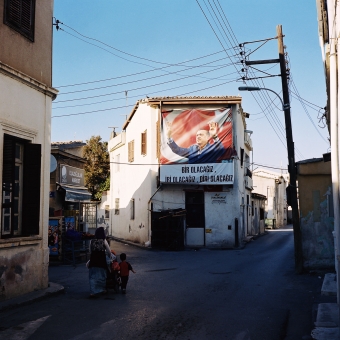 Lefkosa, TRNC, 2018. A poster of Turkish President Recep Tayyip Erdoğan hangs on the wall of a house as a woman walks by on the streets of the old city. Turkey has been financing the state since 1974, first sending settlers to populate the land and now temporary workers to work and hopefully settle in the TRNC. 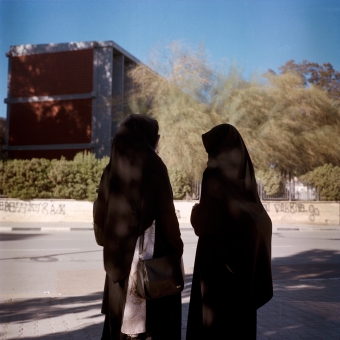 Lefkosa, TRNC, 2017. Women dressed in the traditional veil stand outside waiting for the bus. There is an important migration of Turks from the South East of Turkey to the TRNC and these populations are often more devout than Turkish Cypriots who are prone a more liberal and secular form of Islam. 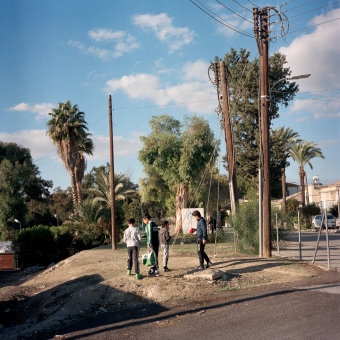 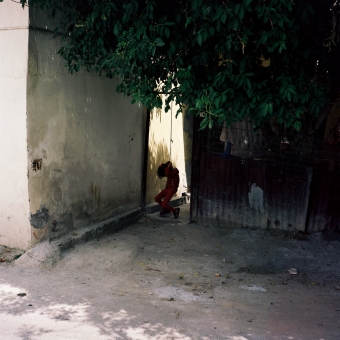 Lefkosa, TRNC, April 2019. A young girl plays at the entrance to her garden. 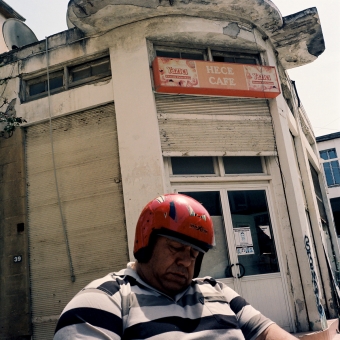 Lefkosa, TRNC, April 2019. A delivery courier takes a moment to find an address. The old town is home to migrants from southern Turkey as well as Kurds from the border with Syria. Arabic and Turkish are often heard in the streets. The old town has been left to crumble and most migrants live there as the rent is cheap. This influx of migrants from Turkey is a sticking point in the negotiations between Cyprus and Turkey, as Cyprus does not consider mainland Turks to be real Cypriots and hence wants them to leave. 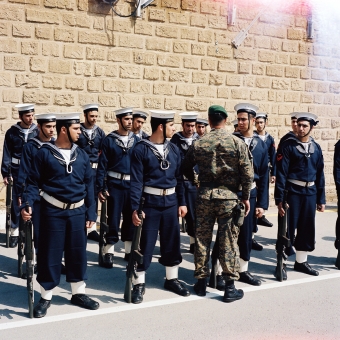 Cyprus' National Day in Nicosia, Cyprus, April 1st 2019. At the site of the Imprisoned Graves, where the rebel fighters of the EOKA movement, which fought for the liberation of Cyprus from British colonial rule and reunification with Greece, are buried. A military contingent makes an official salute to honor the fighters. The EOKA’s 1974 coup attempt failed and was followed by Turkey's military invasion, which has left the island and its capital, Nicosia, divided  ever since. Sentiments of national pride are still very much alive in the last divided island in Europe and while many Cypriots from both sides (Turkish and Greek) wish to be part of a united island in a united Europe, some Greek Cypriots are still calling for reunification with Greece, which they consider their true motherland. 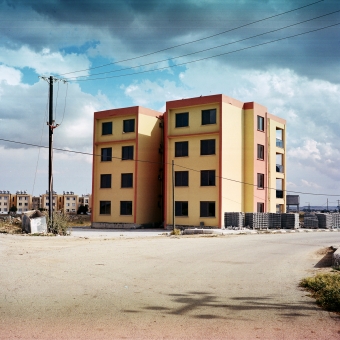 TRNC, May 2019. A new housing development near the Kanli Dere (the Greek name for the Pedieos). 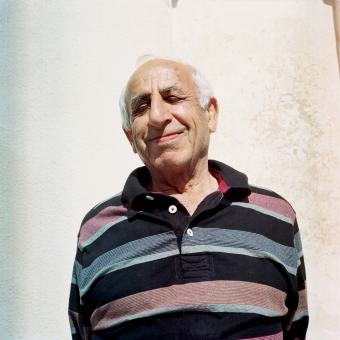 Tuzla, TRNC, May 2019. Darvish Ahmet, the keeper of the Mosque and a Turkish Cypriot, poses for a picture in front of the mosque in the city of Tuzla. 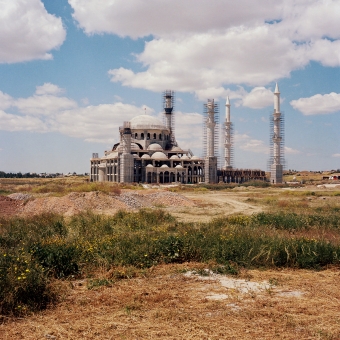 Lefkosa, TRNC, 2019. A view of a new mosque being constructed. The TRNC, bankrolled by Turkey, closely follows the policy of Islamization set forth by Turkish President Recep Tayyip Erdoğan. Many new mosques have been built in the TRNC with money from Turkey. 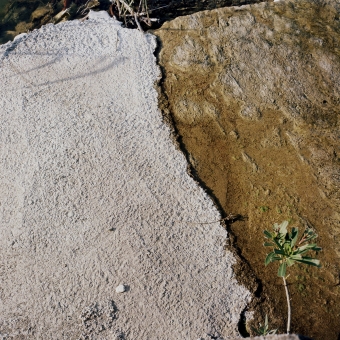 Pano Deftera, Cyprus, April 2019. A view of the Pedieos as it starts to dry up during the final weeks of spring. The river only runs during the rainy season, from November until March. 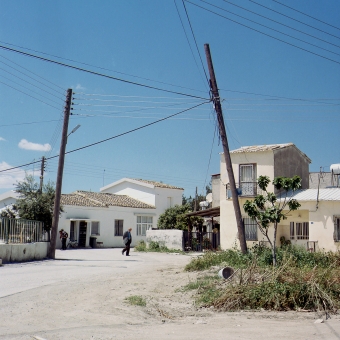 Haspolat, TRNC, April 2019. A view of the village of Haspolat, in the TRNC, situated next to the Kanli Dere (the Greek name for the Pedieos). 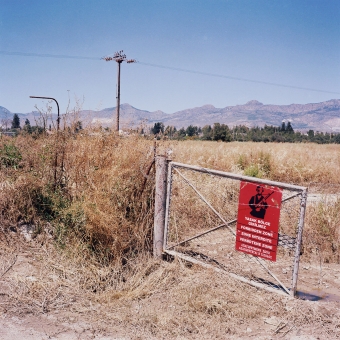 Haspolat, TRNC, April 2019. A military zone located next to the village of Haspolat, next to the Kanli Dere (the Greek name for the Pedieos). 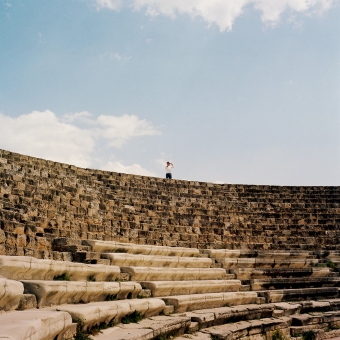 Famagusta, TRNC, May 2019. A man takes a picture inside the ancient city of Salamis, a 2,000-year-old city that shows how ancient and diverse Cyprus was. It is also the end of the Kanli Dere (the Greek name for the Pedieos) as it empties into the bay of Famagusta. 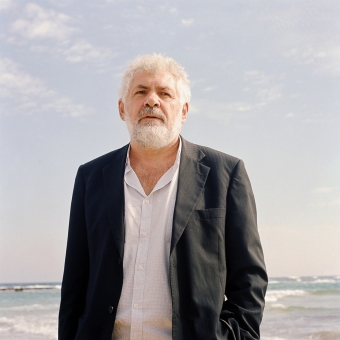 Famagusta, TRNC, November 2018. Chris Anastasiou, a Greek Cypriot poses for a picture on the famous beach of Famagusta, where the first Turkish invasion of 1974 took place. Chris's house used to be on the beach, in Varosha, but the area was fenced off by Turkey during the invasion.  Since then no one is allowed to enter except Turkish military and United Nations personnel. Anastasiou is waiting for a settlement so that he can go back to his former home. 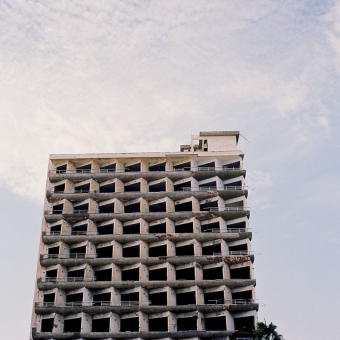 Famagusta, TRNC, November 2018. The Salaminia Tower in Famagusta, as it stands after being bombed by Turkish planes in 1974. The area has been left untouched for 45 years. 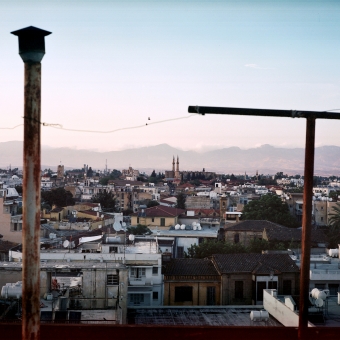 Nicosia, Cyprus, May 2019. A view of Nicosia from a roof in the old town. Nicosia is the last divided capital of Europe, a remnant of the conflict and the troubles that started in the 1950s and ended with the Turkish invasion of 1974 that divided the island. 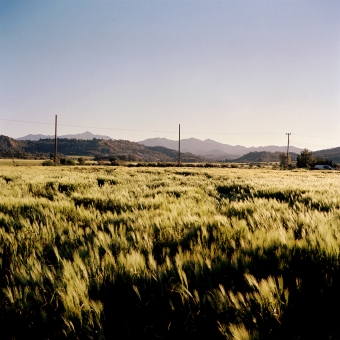 Episkopeio, Cyprus, March 2019. A field below the mountains of Machairas, which are the source of the Pedieos River. 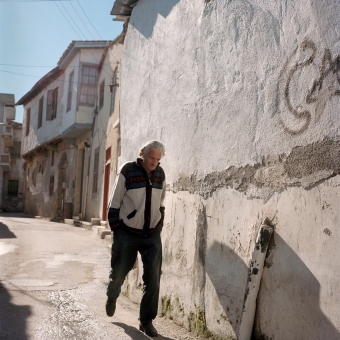 Lefkosa, TRNC, December 2017. A man walks along the streets of the old city. 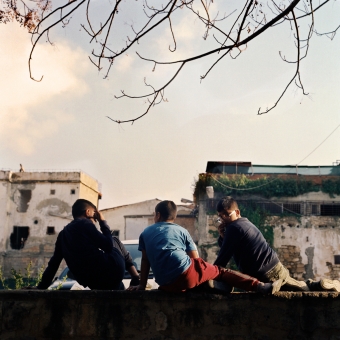 Lefkosa, TRNC, April 2019. Kids relaxing in the courtyard of the Selimiye Camii, a Gothic church that was repurposed as a mosque when Ottoman forces invaded the island in the 16th century during the War of Cyprus, when the island was a Venetian-held territory. 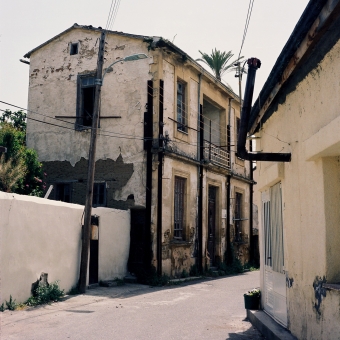 Lefkosa, TRNC, April 2019. A view of Greek Cypriot houses in the old city. During the 1974 conflict, most Greek Cypriots fled south and most Turkish Cypriots fled North, leaving scores of abandoned houses, most particularly in the North. 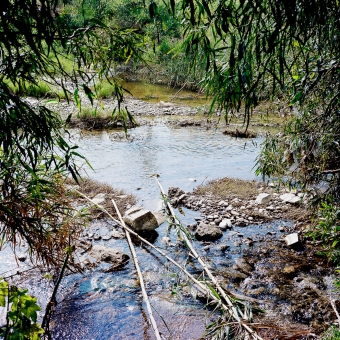 Lefkosa, TRNC, March 2019. A view of the Kanli Dere (the Greek name for the Pedieos) on the Turkish side of Nicosia. During an outbreak of intercommunal violence in 1963-64, Greek Cypriots used the river as a passage to kill and frighten Turkish Cypriots who favored “Taksim” (division of the Island into two communities). 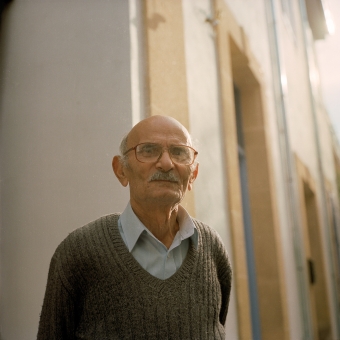 Nicosia, Cyprus, December 2017. An elderly Greek Cypriot man stands for a portrait on the Greek side of Nicosia, in the Republic of Cyprus. Since 1974 the city has literally been cut in half by a wall and a UN buffer zone.. Most Greek Cypriots refuse to cross over on the other side, refusing to legitimize the Turkish Republic of Northern Cyprus, a de-facto state solely recognized by Turkey, its patron. 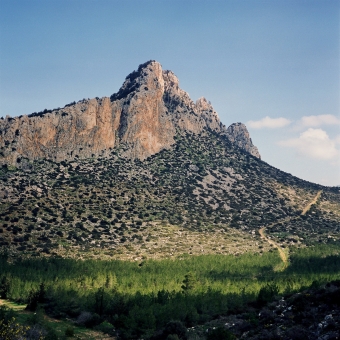 TRNC, March 2019.
The famous Five Fingers Mountain is meant to represent a man sinking and holding out his hand to his lover. It is a well-known monument in Cyprus important to all Cypriots. 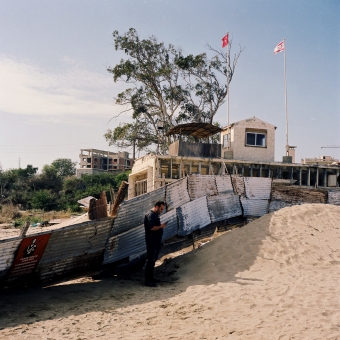 Famagusta, TRNC, November 2018. A Turk scours his phone in front of the militarized zone of Varosha - the Ghost Town - where Greek Cypriots used to live and where they have not been able to return for the last 45 years. 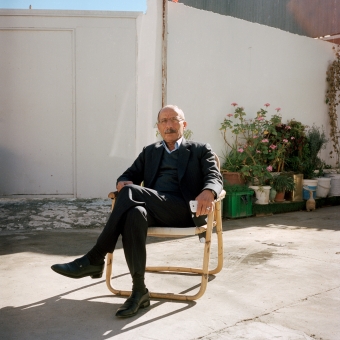 Lefkosa, TRNC, December 2017. A man stands for a portrait inside his courtyard.

Cyprus is a small island nation in the Eastern Mediterranean, granted independence in 1960 and established with two founding communities – Greek Cypriots, by far the majority, and Turkish Cypriots. But since 1974, when the Greek military helped stage a coup, and Turkey launched a military invasion, the island has been divided between the two groups.

The Turkish Republic of Northern Cyprus, or TRNC, controls approximately one third of the island and the Republic of Cyprus, the officially recognized government of Cyprus, and an EU member, controls the other two thirds.

Before the war, before the division and before the now-infamous buffer zone, the Pedieos river ran from its source in the mountains of Machairas to the magnificent bay of Famagusta in the East – in an undivided island.

Today, the river tells the tale of a divided nation. A lot of blood was shed during the conflict, leading the Turks to call it “Kanli Dere,” or bloody river. Running from the south into the divided capital of Nicosia to the north into the TRNC, the Pedieos represents a way to comprehend the various elements that makeup part of this complicated conflict.

This project aims to understand what people have lost, what they have gained and what hope people of this island ever have of coming together, of coming back home and of living together once again.

The river tells a tale as it runs its course, but this river is temporary. As winter rains cease and the summer sun turns the grass into dry wheat, the land of fire awakens, and the river disappears. Like all things in this world, nothing, not even conflicts, lasts forever.

I have already followed part of the 98-kilometer- (61-mile) length  of the river in search of answers, once in winter 2017 and again in the spring of 2019. I have met people on both sides who care deeply about this issue and want to see it come to an end. I have learned the stories of people that live in the river’s vicinity, stories which reveal how Cypriots (Greek and Turkish) have always viewed the river as a natural extension of their life on the island and have perched some of their most important shrines along its path.

Cyprus is marked in part by religion. Orthodox Greeks make up around 78% of the population and Muslim Turks the other 20%. But the island’s geographical location makes it a draw for many other minorities in the region, including Maronites and Armenians, who have also suffered greatly as a result of the ongoing conflict.

To think that 45 years after the division of the island some of these towns are still ghost towns, inhabited, or militarily occupied and fenced off from their own communities is truly a tragedy. Greek Cypriots live in limbo, waiting for resolution, awaiting to return to the lands they owned in the North that are now occupied by Turks from Turkey who came after 1974 to settle and cultivate the land. Turkish Cypriots live in fear and anxiety, thankful for the protection that Turkey affords them but tired of being a pawn in the ever-consuming geopolitical games of the region. Neither side wants to give, neither side wants to lose – hence, the everlasting stalemate.

These stories have never been told in the way this project aims to and that is why I am more conscious that now, more than ever, is the time to document this divided island -- before a reunified or federal Cyprus comes into being, before those who have lost everything wither away and die. I hope this project can do justice and contribute to the peace that one day will certainly come.

My plan is to disseminate the project in collaboration with "UNITE CYPRUS," a group that was created to foster peace and understanding between the two communities, as well as the PRIO Cyprus Centre (PCC) which has created and published extensive papers on the issue, but which lacks a human and visual portrayal of this story.

Originally from Bucharest, Romania, Radu Diaconu immigrated to Canada in 1993, four years after the fall of the Ceausescu regime. He pursued studies in science and humanities throughout high school and went to Concordia University to pursue a degree in political science and photography (fine art). Diaconu also holds a Graduate Diploma in Journalism from Concordia University. He works on medium- and long-term projects, mostly focused on socio-political and religious issues.