The Club Nobody Wants To Join

The Club Nobody Wants To Join

The Club Nobody Wants To Join explores the experiences and struggles of families navigating life after a loved one is killed by the police in Los Angeles, CA. 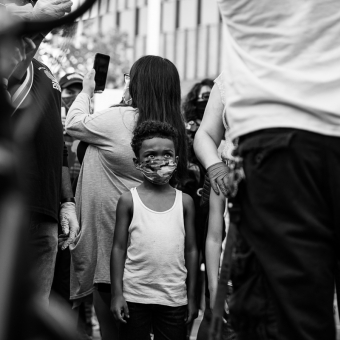 Protesters demand justice for George Floyd and others killed in officer involved shootings in Los Angeles. May 27, 2020. 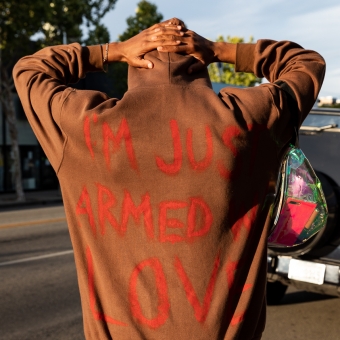 A protesters sweater reads 'I'm Just Armed with Love." A few blocks away law enforcement officers from multiple agencies in Los Angeles flooded the area near Fairfax Ave and 3rd St where they shot rubber bullets and sprayed tear gas at protestors. May 30, 2020. Los Angeles, CA. 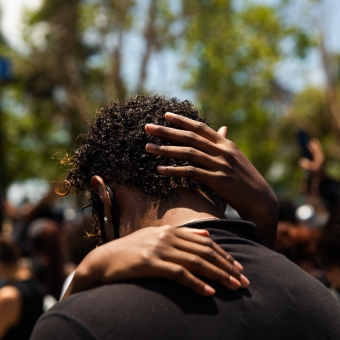 A parent and child share a tender moment during a protest in Leimert Park. June 6, 2020. Los Angeles, CA. 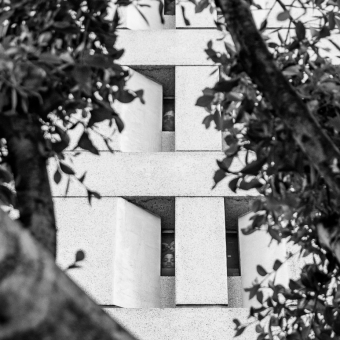 Detainees in the Metropolitan Detention Center in downtown Los Angeles look on as people gather below protesting the killing of George Floyd and the hundreds of people killed by law enforcement in Los Angeles. An eerie clanging sound filled the air as detainees responded to the chants of protestors by banging on windows in unison. May 27, 2020. 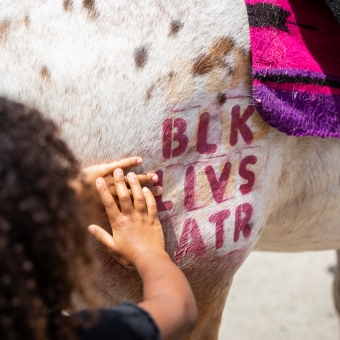 Laughs filled the air as children gathered to pet the pink and purple tailed pony during the Juneteenth Festival in Leimert Park on June 19, 2020. Los Angeles, CA. 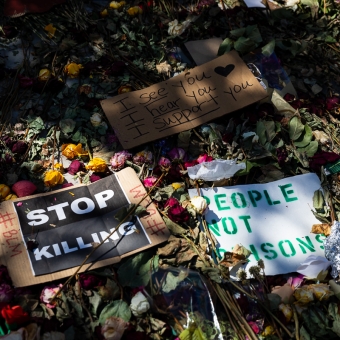 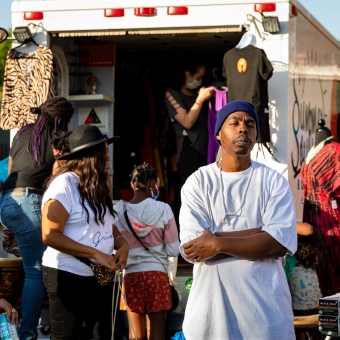 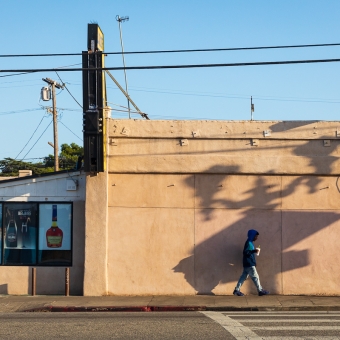 A young person walks past the liquor store on Brynhurst Ave on a quiet afternoon in the Crenshaw District. Los Angeles, CA. July 14, 2020. 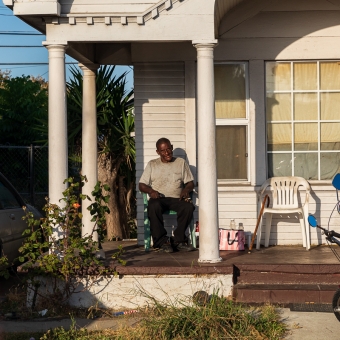 A man spends time on the porch as the sun begins to set in the Crenshaw District. July 14, 2020. Los Angeles, CA. 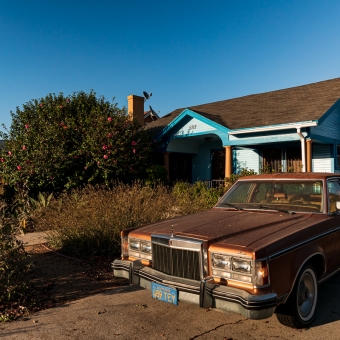 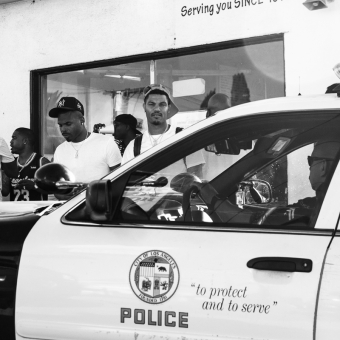 A large group of police officers patrol the area of Slauson and Crenshaw as residents celebrate the late Nipsey Hussle's birthday on August 15, 2020. Los Angeles, CA. 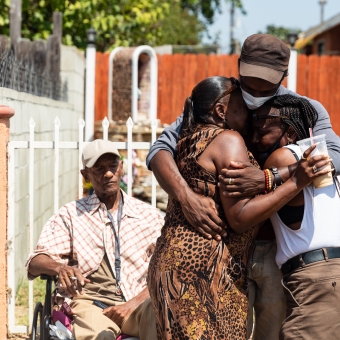 Loved ones and neighbors gather at the site where Dijon Kizzee was slain by Los Angeles Sheriff's Deputies the night prior. An array of blood soaked gauze and soiled gloves left by deputies littered the grass and remnants of blood stained the concrete where Kizzee fell.
September 1, 2020. 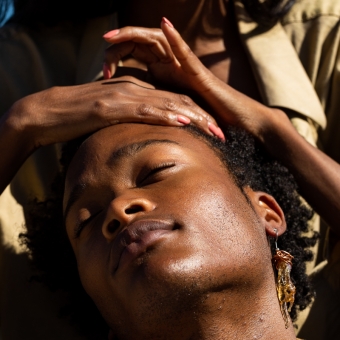 Jase shares an intimate moment with Audrianna as she takes down his braids in the afternoon sun. July 21, 2019. Los Angeles, CA. 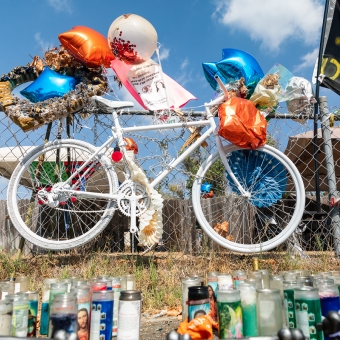 A memorial honoring Dijon Kizzee stands where he was slain by Los Angeles Sheriff's Deputies while riding his bicycle. September 1, 2020. Los Angeles, CA.

The Club Nobody Wants To Join explores the experiences and struggles of families navigating life after a loved one is killed by the police in Los Angeles, CA.

What do you do if the police kill your loved one? This question has haunted me for quite some time now. For months during 2020 I spent almost every week with the Los Angeles chapter of Black Lives Matter documenting their fight to address police brutality in Los Angeles. While hostile encounters with police officers at protests make for newsworthy imagery, the heart wrenching stories from the families
who have lost loved ones at the hands of law enforcement are what has stayed with me. Their pain follows me home and wraps itself around my shoulders whispering in my ear…”what if you’re next?...”
From slave patrols to vigilante Klansman and local sheriffs to the hypermilitarized law enforcement agencies of today, the use of police forces to stamp out the spirits and lives of Black people has been an ongoing trauma. We see the statistics and scroll past the names made into hashtags but what happens when the attention fades away? What happens to those families and communities when the news cycle moves on and the public outrage subsides? How do you continue living when a hole has been ripped into your life and somebody you love has been taken from you in a violent, state-sanctioned murder? This project, The Club Nobody Wants To Join, explores what could be the reality of any Black American person at any moment: navigating life after a loved one is killed by the police.


After the first enslaved Africans were brought to the shores of Virginia in 1619 it was clear that slaveholders and beneficiaries of the system of slavery would do anything and everything to protect the economic system that was driving their wealth. Initially policing institutions in slaveholding states were slave patrols made up of local citizens tasked with hunting down enslaved Africans who had run away as well as quashing revolts and uprisings. Following the end of the Civil War, local sheriffs and vigilante Klansman led the charge in enforcing segregation, disenfranchisement, and terrorizing newly freed Black people.

Black Americans have never stopped fighting for freedom from violence. Most recently, outrage over racial profiling and the killing of Black people by police officers and vigilantes in recent years helped give rise to the Black Lives Matter movement. In July 2013, the movement began to take form when the hashtag #BlackLivesMatter began to circulate on social media following the acquittal of George Zimmerman in the murder of Trayvon Martin. Since 2013, the hashtag has morphed into a decentralized political and social movement whose mission is to “eradicate white supremacy and build local power to intervene in violence inflicted on Black communities.”


Despite COVID-19 lockdowns and global attention on police brutality, law enforcement agencies across the United States continue to murder community members. The collaborative data project, Mapping Police Violence, compiles comprehensive data on police killings nationwide to quantify the impact of police violence in communities. In 2020, American police officers killed 986 people. When we dig further into the data we quickly find that Los Angeles law enforcement agencies have consistently led the charge in terrorizing not just Angelenos but specifically Black people living in Los Angeles. When looking at police killings of Black people between 2013 and September 2020, LAPD ranks 6th and Los Angeles County Sheriff’s Department (LASD) ranks 9th. Despite the fact that Black people make up less than 10% of LA County’s population, they represent 25% of police murders. When we think about the aftermath as it relates to police brutality in Black communities we have to contend with the fact that criminal charges are rare. Since 2000, only two officers have been charged as a result of shooting a civilian while on duty in Los Angeles county.
Anecdotes of the Aftermath

Following the death of George Floyd, Myesha Lopez felt called to engage in local activism and wrote a letter to her local officials. In her message she outlined her experiences with law enforcement and the ways in which she had witnessed officers mistreat Black people in her community. On June 10, a police official responded to her email suggesting that George Floyd’s murder was an isolated incident and unrepresentative of most officers’ behavior. The next day police killed her father - Michael Thomas. Since her father’s death, Lopez has struggled to get basic information from LASD, including names of the officers involved or an incident report. Even a simple acknowledgment of the family’s pain would go a long way, she said: “We charge these people with authority over our lives, and they are unwilling to even say, ‘I’m sorry.’”

In April 2018, Quintus Moore glanced at the television and saw a report that LAPD officers had shot a man inside the Baldwin Hills Crenshaw mall. Later that day he realized that he hadn’t heard from his son and following a series of frantic messages, a trip to the mall, and calls to the morgue, Moore and his family discovered their worst fears had come true. Their son, Grechario Mack, had a mental health crisis and was subsequently shot and killed by LAPD officers inside the mall. Less than 24 hours later, officers arrived at a park and killed Kenneth Ross Jr, another Black Angeleno who struggled with mental illness. The two families, brought together by the Los Angeles chapter of Black Lives Matter the day of Ross’s death, are now channeling their grief into a fight for justice – taking on one of the country’s deadliest police systems.

Those hashtags - those names - are people. Brothers, cousins, children, parents, neighbors. People who lived, breathed, laughed, smiled. Their absence has ripped through people’s lives and brought folks to their knees in grief. These people mattered. The experiences and the struggles of the ones they left behind matter. Humanizing the aftermath of police violence is a small step toward a more just, more empathetic, more humane future not just for Black people but for everybody.

Alexis is a freelance photographer based in Los Angeles. She started teaching herself photography in 2017, and has since enjoyed producing editorial, lifestyle, documentary, and commercial work for a variety of clients including The New York Times, Rolling Stone, Men's Health, and New York Magazine. Most recently her work was part of a collaborative exhibition between the National Center for Civil and Human Rights, Atlanta Celebrates Photography and Authority Collective.

Propelled by her love for the interplay between science and art, Hunley is naturally drawn to connecting a visual narrative to the psychological facts and figures that fascinate her. Hunley looks for real communion and chemistry between the people she surrounds herself with personally as well as those that she photographs. She has learned to trust her eye as an acute translator of all that is important to her creative process - emotion, shadows, sunlight, color, connection, sensation.